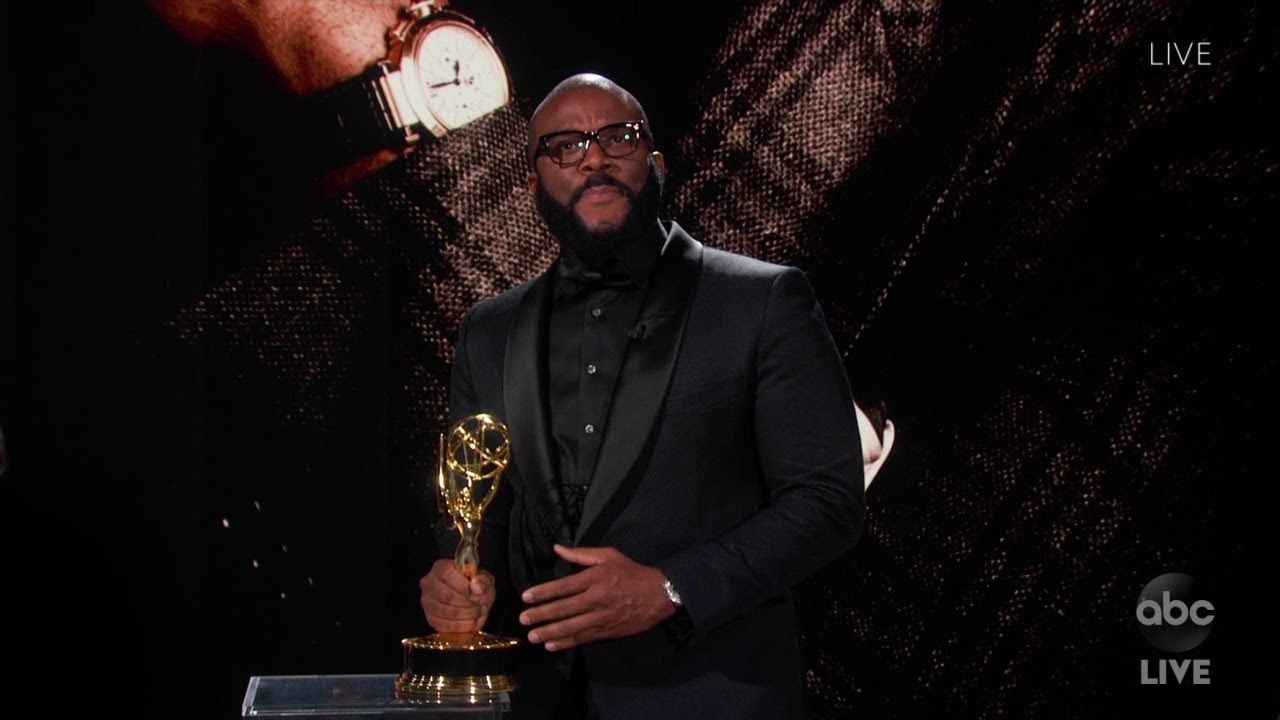 Tyler Perry was the recipient of a special honor at the 2020 Emmy Awards.

During Sunday’s virtual ceremony hosted by Jimmy Kimmel, the entertainment mogul was given this year’s Governor's Award. Perry, 51, was chosen by the Television Academy’s Board of Governors for his achievements in television and his commitment to offering opportunities to marginalized communities through the Perry Foundation and other philanthropic programs.

Oprah Winfrey and Chris Rock presented the award to Perry.

"This is amazing. I didn't expect to feel this way," he said.

"When I was about 19 years old, I left home and my grandmother, she gave me a quilt that she had made," he said. "And this quilt was something I didn't really care for. It had all these different colors and these different patches in it. And I was quite embarrassed by it. I had no value in it at all."

But several years later, Perry was walking by an antique store and saw a similar quit. He recalled how the salesperson told him the story of the quit, which came from a freed slave woman.

"I became so embarrassed," he said. "Here I was, a person who prides myself on celebrating our heritage, our culture, and I didn't even recognize the value in my grandmother's quilt. I dismissed her work and her story because it didn't look like what I thought it should. Now, whether we know it or not, we are all sewing our own quilts with our thoughts, our behaviors, our experiences, and our memories."

"Because in my grandmother's quilt, there are no patches that represented Black people on television," he said. "But in my quilt, her grandson is being celebrated by the Television Academy. I thank you for this. God bless you."

Tyler Perry is a self-made entertainer and is behind 22 feature films, over 20 stage plays, 13 television shows, several bestselling books and the massive Tyler Perry Studios in Atlanta, Georgia.

Tyler Perry launched his first sitcom, Tyler Perry’s House of Payne, 2007. With over 250 episodes, the show aired more episodes than any other series with a predominately Black cast. He has since written and directed and produced over 1,2000 episodes of TV and his movies have made more than $1 billion in the U.S. box office.

Perry opened his first studio in Atlanta in 2008, the operations have grown to over 330 acres of land in Georgia. Recently, he launched a new initiative with “Camp Quarantine”, which allows him to film new seasons of his BET and BET+ shows during the pandemic.

The Governors Award debuted in 1978 and honors people or organizations in the TV arts and sciences whose achievement is so exceptional and universal in nature that it goes beyond the scope of annual Emmy Awards recognition. Previous recipients include Star Trek; American Idol; William S. Paley; Hallmark Cards Inc.; Masterpiece Theater; Comic Relief; and ABC, CBS, FOX, NBC, and A+E Networks.