Quentin Tarantino is one of the most sought after directors in Hollywood. His movies win awards, sell out movie theaters, and launch careers of time and time again. But this weekend, Quentin Tarantino did something most Hollywood's elite wouldn't even consider doing. Tarantino protested against police brutality in New York City this Saturday. Quentin Tarantino took the streets to march against police brutality on Saturday in NYC. The Oscar-winning director, who has made graphic movies such as Pulp Fiction, reveals that he thinks the issue is not taken seriously enough. 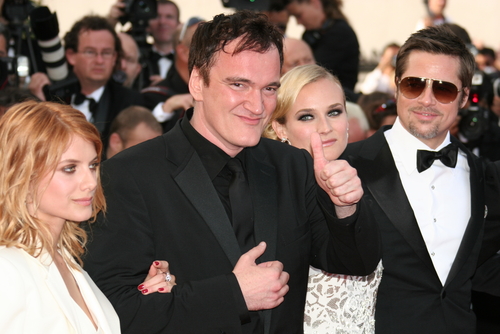 cinemafestival / Shutterstock.com 'This is not being dealt with in anyway at all. That's why we are out here. If it was being dealt with, then these murdering cops would be in jail or at least be facing charges,' he said, according to AFP. Quentin Tarantino, who in the past has said that film is nothing like real life, blasted law enforcement for the killing of a 12-year-old in Cleveland, Ohio.

'Then they knocked down and handcuffed his sister, and locked her in the police car. They would not allow his mother to hold her lifeless child who lie dead in the street.'

'For almost a year there's been no charges filed and not even a grand jury selected.'

'Friends said Tamir was a gifted artist and very creative.'

Cleveland prosecutors have not yet charged the two officers with a crime, although a judge had recommended it. nisargmedia.com / Shutterstock.com Quentin Tarantino didn't stop there. The director also bashed the police for the death of Freddie Gray, a 25-year-old unarmed black man who died in the back of a police van. And Antonio Guzman Lopez, a 38-year-old unarmed man shot dead by San Jose State University Police as well as Michael Brown, an 18-year-old black teen shot by a police officer in Ferguson, Missouri, whose death also sparked violent protests. The march was organized against political activist Dr. Cornel West and spanned three days in midtown Manhattan. It was called #RiseUpOctober. It is important to point out that approximately 929 people have been killed by police in the U.S. so far this year, according to The Guardian, with blacks more than twice as likely to be shot.

What do you think? Share with us your thoughts and comments on Quentin Tarantino's recent protest against police brutality.
Previous articleKaty Perry's Makeup Artist Mysteriously Found Dead
Next articleNational Football Commercial Casting Call for a TON of Roles in Los Angeles

18 Of The Most Famous TV Commercial Actors We All Know

Tyrese Gibson, Terrence Howard, and Jeremy Piven have all signed on for the action film 'The System,' Now, Lil Yachty has also joined the cast. The action-packe...