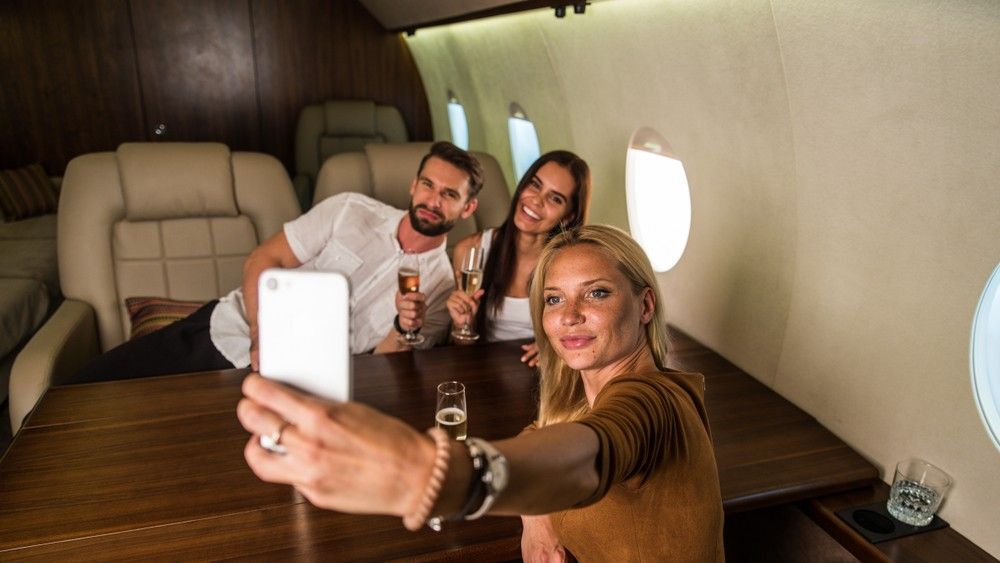 Influencers can make tens of thousands if not millions of dollars. The power of a social media following has translated from a cool statistic to a powerful tool in the entertainment industry. As we previously reported, more and more casting directors are choosing talent who have a larger social media following than those that do not regardless of talent. This translates to above the line and below the line workers doing whatever it takes to gain a social media following. As a result, this new news report surrounding studio space is not that surprising.

According to reports, Los Angeles influencers have been posting fake private jet selfies. A recent listing on booking platform Peerspace has revealed several studios with staged setups including interiors of private jets.

A twitter user broke the news and discovered these rooms are offering rates at only $64/hour. “I just found out LA IG girlies are using studio sets that look like private jets for their pics,” says Melissa (@maisonmeIissa). It’s crazy that anything you’re looking at could be fake. The setting, the clothes, the body… IDK it just kinda shakes my reality a bit lol.”

Nahhhhh I just found out LA ig girlies are using studio sets that look like private jets for their Instagram pics. It’s crazy that anything you’re looking at could be fake. The setting, the clothes, the body... idk it just kinda of shakes my reality a bit lol. pic.twitter.com/u0RsOnyEEk

TikTok currently has 120 million users in the United States, and the video-sharing app is known becoming known as a great way for unknown actors, models, and talent to get discovered. Moreover, the valuable marketing platform for brands seeking to capture the eyes and minds of Generation Z.

In a report by The Hollywood Reporter, the analytics firm Sensor Tower estimates people downloaded more than 100 million times in the United States. The UTA recently signed Brittany Tomlinson, whose August video showed her trying kombucha for the first time, and it had 1 million likes. Then the NFL announced a multiyear partnership with TikTok to offer game highlights and behind-the-scenes footage to users. Now, Will Smith is transitioning to TikTok after taking over Facebook, YouTube, and Instagram. Will Smith has over 700 million fans.

Are you interested in becoming an influencer? Check out our guide here. More Project Casting Entertainment News:
Previous article'Avatar 3' is Nearly Finished Filming (VIDEO)
Next articleNetflix To Raise Subscription Their Prices Soon (REPORT)