The actor, who was snubbed for playing Martin Luther King, Jr in Selma is pretty upset about not getting an Academy Award Nomination.

David Oyelowo accuses the Academy of favoring "subservient" black roles. Oyelowo said: "We, as black people, have been celebrated more for when we are subservient, when we are not being leaders or kings or being at the center of our own narrative". Oyelowo said that the Academy of Motion Picture Arts and Sciences and the entire film industry, don't enjoy making or celebrating movies about black protagonists unless the movies are told through the eyes of white people. Oyelowo says: "So you have a very nice white person who holds black people's hands through their own narrative." 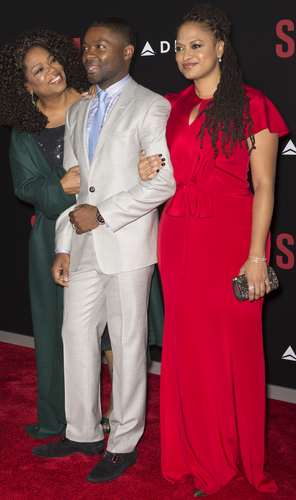 Ovidiu Hrubaru / Shutterstock.com David Oyelowo may have a point. The critical and commercial success of 2013 Oscar winning movie, 12 Years a Slave and The Butler, all demonstrate that movies about black people are only award winning when the lead actor is subservient. In addition, for the first time in 20 years, all of the acting nominees are white. This prompted the viral Twitter hashtag #OscarsSoWhite and an SNL sketch about how King himself would have been disappointed by the news. The response was so negative that the black president of the Academy, Cheryl Boone Isaacs was forced to respond to the criticism. From the Hollywood Reporter:

As evidence, Oyelowo argued that "Denzel Washington should have won for playing Malcolm X" and that Sidney Poitier should have won his Oscar for In the Heat of the Night rather than Lilies of the Field.  "So this bears out what I'm saying," the actor continued, "which is we've just got to come to the point whereby there isn't a self-fulfilling prophecy — a notion of who black people are — that feeds into what we are celebrated as, not just in the Academy, but in life generally. We have been slaves, we have been domestic servants, we have been criminals, we have been all of those things. But we have been leaders, we have been kings, we have been those who changed the world." The audience responded with applause. Oyelowo continued, "Those films are so hard to get made. People have often said to me, 'Why has it taken so long?' I mean, he [King] was assassinated almost 50 years ago. There has been no film where Dr. King has been the center of his own narrative up until now. That's because up until 12 Years a Slave and The Butler did so well, both critically and at the box-office, films like this were told through the eyes of white protagonists because there is a fear of white guilt."

You can check out David Oyelowo discussion on race in Hollywood and the Academy Awards here: http://youtu.be/jlUL6oyDnWc What do you think?Discuss this story with fellow Project Casting fans on Facebook. On Twitter, follow us at @projectcasting. Image Credit: Photograph: Richard Saker/Guardian
Previous articleMadden 15 Predicted the Score and Stats of the Super Bowl
Next articleDenzel Washington Wants to Join the Cast of Fox's 'Empire'