The Walking Dead/Star Wars mash up is the best thing you will see all week.

One of the biggest shows on TV mashed up with one of the biggest movie franchises in history on Twitter and it was amazing. The Walking Dead twitter account proved that you don't need to be associated with Disney to get in part of the Star Wars magic. The hit AMC zombie apocalypse drama asked fans on social media to mashup the two franchises on Wednesday using the hashtag #TWDStarWars, and fans answered the call turning it into a trending topic on Twitter. 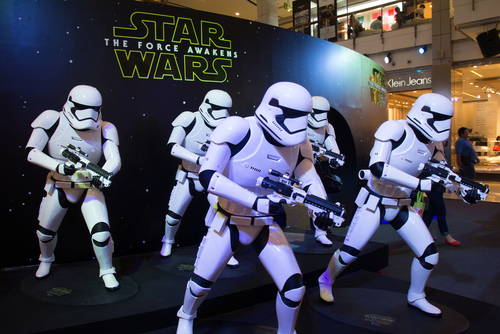 You can check out some of the best tweets from #TWDStarWars!

We LOVE your #TWDStarWars contributions. Keep it going! Here's another from us: Daryl Solo? Hans Dixon? You tell us! pic.twitter.com/dXTtCMB2bN

You have to admit, Kylo Michonne would be pretty badass #TWDStarWars pic.twitter.com/STNa2bFUF8 — The Walking Dead (@TheWalkingDead) December 16, 2015

Which one was your favorite? Share with us your thoughts in the comments below!
Previous article3 Ways to Protect Yourself from 'Star Wars' Spoilers
Next articleSTUDY: People Feel Safer at Movie Theaters than at Work