Rose McGowan says she doesn't care if she's blacklisted for criticizing Adam Sandler's wardrobe requirements for a movie. Instead she hopes that other women in the industry "know your worth and know that it's not OK to be treated like a piece of meat." Rose McGowan spoke out to Good Morning America after claiming she was fired by her agent for criticizing the wardrobe requirements for an Adam Sandler movie she received an audition script for. 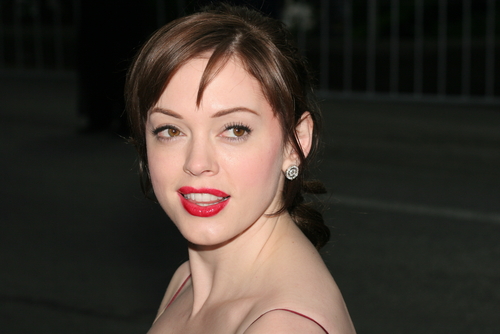 Shutterstock The actress said she tweeted the casting note because it made her upset and laugh. McGowan would later call Hollywood "old fashioned." In a June 17 tweet, McGowan called out the wardrobe requirements in a casting note. She claimed Adam Sandler required actresses auditioning to wear a "black (or dark) formfitting tank that shows off cleavage (push-up bras encouraged). And formfitting leggings or jeans."

She also told the ABC morning show that the casting note she tweeted is one of many examples but didn't want to reveal additional, specific examples. Instead she said she hopes that the next girl coming up after her will know "she doesn't have to sell her body and her soul just to be a creative person. That isn't the fine that you pay at the gate, and it shouldn't be." She advised other women in Hollywood to "know your worth and know that it's not OK to be treated like a piece of meat." McGowan, meanwhile, said she doesn't care if she's blacklisted for calling out the casting note, adding "Bring it! You want to play, let's play." [THR]

A week later, Rose McGowan tweeted that she had been "fired by my wussy acting agent because I spoke up about the bullshit in Hollywood." But, it begs the question - how does Adam Sandler's production team feel about the casting note? According to ABC News they "felt it was completely inappropriate and have made sure that it is not sent out again." Adam Sandler is currently filming 'The Do Over' in Savannah, Georgia. Casting directors are constantly looking for extras. For the latest casting calls for Adam Sandler's new movie, 'The Do Over', click here. Discuss this story with fellow Project Casting fans on Facebook. On Twitter, follow us at @projectcasting.
Previous articleHBO's 'Confirmation' Casting Call for Assistants in Atlanta
Next articleHow Jared Leto Uses Method Acting for the Role of Joker