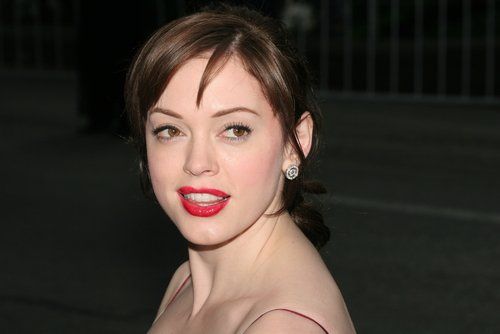 Rose McGowan says her agent fired her after revealing audition notes from Adam Sandler's new movie, "The Do Over".

In a twitter message posted on June 17th, the Charmed actress criticized the wardrobe description for a part in a film that she received an audition script for. She said the upcoming movie stars a male actor whose name rhymes with "Madam Panhandler," and she later confirmed to E! that the star is Adam Sandler.

Rose McGowan pointed out that the actresses auditioning for the role were told to wear a "black form-fitting tank that shows off cleavage (push-up bras encouraged). And form-fitting leggings or jeans." On Wednesday, McGowan tweeted that she had been dropped by her agent following the flap. "I just got fired by my wussy acting agent because I spoke up about the bullshit in Hollywood. Hahaha. #douchebags #awesome #BRINGIT," she tweeted. McGowan, who has recently appeared on Crackle's Chosen and ABC's Once Upon a Time, had been repped by Sheila Wenzel and Steve Muller at Innovative Artists. [Image Credit: Denis Makarenko / Shutterstock.com//h/t: THR> Discuss this story with fellow Project Casting fans on Facebook. On Twitter, follow us at @projectcasting.
Previous article'Star Trek 3' is Now Filming in Vancouver
Next articleKids Left Traumatized After Theaters Shows 'Insidious 3' Instead of 'Inside Out'