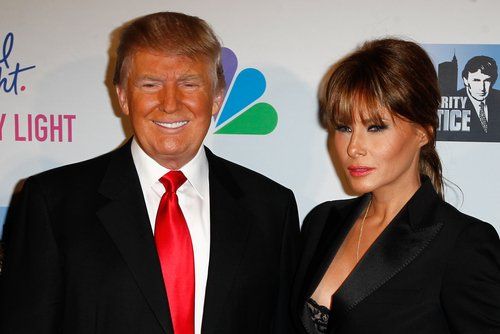 NBC chairman Bob Greenblatt wants you to know that his network is not to blame for Donald Trump's surprising political run.

Before Donald Trump was a politician, Trump had starred for years as the CEO in the reality TV shows, The Apprentice and The Celebrity Apprentice. But in an interview at a Television Critics Association press event yesterday, Greenblatt refused to say that there is any connection between The Apprentice and Donald Trump's political success. “We are happy to have a show that was doing really well, with a guy who was a big TV star. It’s impossible to predict where it goes from there. I think it surprised all of us that he would want to [run for president> but that’s what is great about this country,” Greenblatt said at the TCA event, according to Deadline. “But I don’t think there’s that much correlation between one and the other.” Deadline goes on to report that Greenblatt dismissed reporters' questiosn that seemed to imply NBC's reality show gave Trump the platform to run for President. Nowadays, everyone is trying to point fingers and figure out how Donald Trump became the Republican Presidential nominee. Many people are blaming news media outlets by giving the former reality star countless headlines and free press. But, who could blame the news media as Donald Trump's campaign helped increase Fox News Channel ratings to the highest point this year. Greenblatt went on to say that Donald Trump would never be invited to host Celebrity Apprentice again - not “as long as I’m here.” But, that doesn't mean he wouldn't have his own TV show. According to reports, when asked if there was another opportunity for Donald Trump, Greenblatt said, “Oh, I couldn’t answer that,” Greenblatt said, according to Variety. “I have no idea at this point.” Related: What do you think? Share with us your thoughts in the comments below.
Previous articleNick Jonas Strips to Cross Frozen Lake with Bear Grylls [VIDEO]
Next articleJonBenét Ramsey's Brother to Break Silence on 'Dr. Phil'