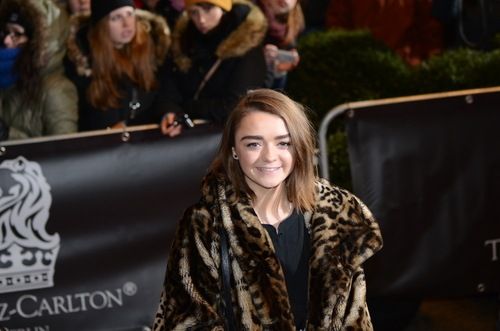 English actress Maisie Williams, who is known for playing Arya Stark in the Game of Thrones, seems to be the latest celebrity to have fallen victim to internet hackers. Rumors that her social media account may have been hacked surfaced after a photo appearing to feature a topless Williams went viral online. According to reports, one of the private pictures shows the back of the 19-year-old actress wearing just black bikini bottoms as she looks over her shoulder. Another photo shows Williams with her friends getting undressed. According to DigitalSpy, the photos that are going viral over the weekend are believed to have been leaked from a private Facebook account. In addition, it is rumored the photos were taken from Williams' most recent visit to Japan. After one of the photos surfaced on Instagram, fans urged that the photo be deleted since it was allegedly stolen from her private account. Williams joins the long list of A-list actresses including Jennifer Lawrence, Gabrielle Union and Kirsten Dunst, who fell victim to The Fappening after their iCloud accounts were hacked in 2014. What do you think? Discuss this story with fellow Project Casting fans on Facebook. On Twitter, follow us at @projectcasting.
Previous articleChris Pratt Reveals How He Survived As a Struggling Actor
Next article$2500 TV Commercial Atlanta Casting Call for Families