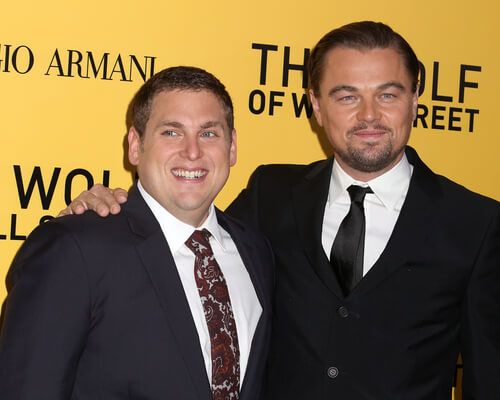 NEW YORK - DEC 17: Jonah Hill and Leonardo DiCaprio attend the premiere of "The Wolf Of Wall Street" at the Ziegfeld Theater on December 17, 2013 in New York City. (JStone / Shutterstock.com)

Leonardo DiCaprio has given good friend Jonah Hill a prank on a New York City street.

Leonardo DiCaprio terrified Jonah hill during a prank in which he pretended to be a deranged fan or a member of the paparazzi as he rushed up to his unsuspecting Wolf of Wall Street co-star on the street. The encounter in NYC on Monday was captured on video, according to reports. Jonah Hill can be seen standing by a restaurant as casually dressed DiCaprio runs up to him, pointing a cell phone in his face. Jonah Hill looks incredibly shaken up before he realizes it's his friend. The two share a long hug as the real paparazzi watched from the distance.

Related: What do you think? Share with us your thoughts in the comments below.
Previous article'America's Got Talent' Stunt Goes Wrong on Live TV
Next articleParents of 'Star Trek' Actor to Sue Chrysler Over Freak Accident