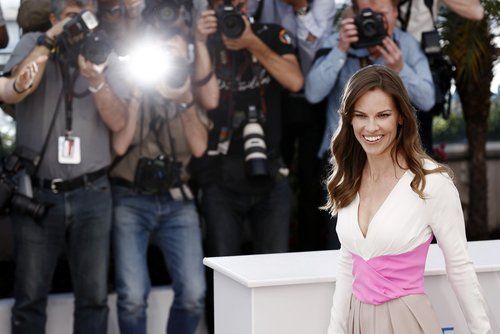 Hilary Swank made her film debut in a minor role in the 1992 comedy film Buffy the Vampire Slayer. She would later get her breakout role in the sequel to The Karate Kid, The Next Karate Kid in 1994. Hilary Swank won her first Academy Award for the 1999 indie film Boys Don't Cry. Five years later she would connect with Clint Eastwood in the 2004 sports drama Million Dollar Baby did she become a household name. Hilary Swank played struggling-waitress-turned-boxer Maggie Fitzgerald, which allowed her to win a second Academy Award and Golden Globe for Best Actress. Recently, Hilary Swank spoke with Sean Eckhardt from The Hollywood Reporter about the entertainment industry and how she works as an actor. She revealed that Hollywood still favors men over women and how she prepares for acting roles. "My male counterpart will get paid ten times more than me — ten times,” she said, speaking at the Loyola Marymount University School of Film & TV. "Not double, but 10 times for the same job. We only have this much left for the female actress. I mean, there’s two genders on this earth. Both are compelling, interesting, diverse, wonderful in all their own separate ways. And yet there’s an influx of male roles and there's just not for women." Swank also revealed how she became a better actress and what she did to prepare herself for roles.

I work with-I never studied which is really a con because a lot of my early work, you can see just how my-I learned from watching myself.  So, there's a lot of bad stuff that is out there that I started in, to try and figure it out.  And I never knocked an opportunity.  I took every single role that I was given to try and learn my craft.  And then I started working actually with Larry Moss right around-actually it might have been probably Boys Don't Cry.  I thought this is an opportunity that I can't fail in.  Not for me really as an artists but because I didn't want to let' this person down.  This person who had lived.  It was a huge, enormous responsibility to play this real life character.  It was the first time I’d done any type of playing someone who had lived before so I didn't take the responsibility lightly and I was referred to Larry Moss by two friends of mine and so we did, like, one on one just breaking down the script and talking a lot about character and all of this stuff.  And I still to this day work with Larry.

Hilary Swank demonstrates that acting takes hard work, practice and attention to detail. The Academy Award winner also points out that she always feels as though she can improve upon her finest work. "I wish I could go back and do that again because when you’re making a movie, it’s in pixels and it’s not until you’re done that you get to see the whole picture.  So and then, it’s too late.  You can’t go back, so yes, there’s always times when I see where I can improve.  And to answer your question about getting a role and not getting a role, of course, I’ve lost out roles to other actresses.  And of course, they’ve lost out roles to me and that’s just a part of life, but I’ve come to a place now where I’m so trusting that opportunities will come."
Previous articleReport: Maryland Tax Credits are Worthless
Next articleHow To Get a Talent Agent