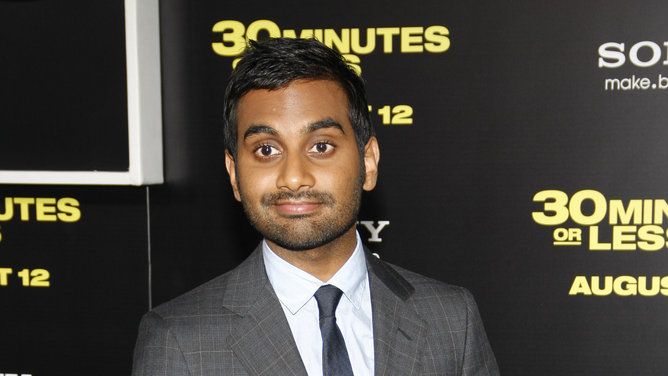 Aziz Ansari at the Los Angeles premiere of '30 Minutes Or Less' held at the Grauman's Chinese Theatre in Hollywood, USA on August 8, 2011.

The Golden Globe winner, Aziz Ansari, was accused of inappropriate behavior by a woman who he went on a date with last year.

According to an article published in Babe, a 23-year-old girl, who decided to remain anonymous named "Grace",  was reportedly "in tears" after her alleged date with Ansari. The actor exchanged phone numbers with her at an Emmy Awards after party. She claims their date ended with her feeling violated. "Grace" claims he almost immediately began kissing, fondling and undressing her. Then she said Ansari was going to grab a condom but asked him to slow down. However, he continued and performed oral sex on her. Grace says when he started sticking his fingers in her throat she used "verbal and non-verbal cues" to show her discomfort with the situation.

Tinseltown / Shutterstock.com The woman claims Ansari doesn't know if he got the message, but when it eventually clicked she said he said, "Of course, it's only fun if we're both having fun." "Grace" says Ansari continued to push himself on her.  She says she eventually left in tears. She texted Ansari the following day, "Last night might have been fun for you it wasn't for me.  When we got back to your place, you ignored clear, non-verbal cues; you kept going with advances.  You had to have noticed I was uncomfortable."  She then described part of the experience. The woman says she decided to come forward after she saw Ansari wear a Times Up pin at the Golden Globes, where he won Best Actor. Related: What do you think? Discuss this story with fellow Project Casting fans on Facebook. On Twitter, follow us at @projectcasting.
Previous articleLive in Atlanta? Omni Hotels is Now Hiring People to Work-From-Home
Next articleGeorgia-Filmed 'The Walking Dead' Renewed for Another Season