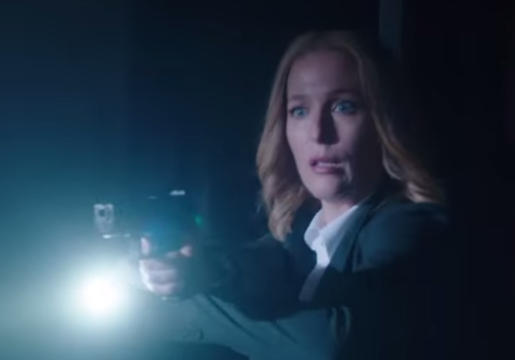 The new 'X-Files' trailer features the first footage of Mulder and Scully in sci-fi action.

Fox's miniseries reboot of popular 90s show X-Files premieres early 2016 but, a new promo reveals what to expect in the new series. In a new promo for the upcoming 'X-Files' miniseries, we get our first look at Mulder and Scully in action. The two FBI agetns are seen running into a dark room with their guns drawn, probably on the search for aliens or zombies. The video was released as part of Fox's "201 Days of 'The X-Files' promo for the show's upcoming miniseries reboot. If fans start watching one episode per day beginning July 7, they will finish the series on January 24, 2016, the day the new miniseries premieres. 'The X-Files' became one of the most successful TV dramas of all time during the show's initial nine-season run. 'The X-Files' had well over 27 million viewers an episode and earned 16 Emmy Awards, five Golden Globes and a Peabody Award. Discuss this story with fellow Project Casting fans on Facebook. On Twitter, follow us at @projectcasting.
Previous article[Watch] Johnny Depp Surprise Children's Hospital Patients As Captain Jack Sparrow
Next articleWhy Comedy Central Renewed 'South Park' for 3 More Seasons