Netflix discovered some impressive numbers about who is watching Stranger Things 2. The analytics company said a “significant viewing event occurred” when the Netflix series returned on October 27th for its second season. Within the first three days, Episode 1 averaged a jaw-dropping 15.8 million U.S. viewers and nearly 11 million in the critical demographic watched the show. Nielsen also revealed that all of the nine new episodes averaged 4 million viewers and 3 million in the key demo.

But, here’s the kicker - Nielsen only tracked TV viewing and not the number of viewers on mobile devices, which may suggest Stranger Things had more than 15.8 million viewers.

Meanwhile, The Walking Dead, another Georgia-filmed production, is going through a rating crisis. Last Sunday’s episode drew a 4.0 rating in the all-important 18-49 demographic, which was “the lowest for the show since March 11, 2012 — the next-to-last episode of season two. TWD’s 8.92 million viewers were the least since the season two finale.” 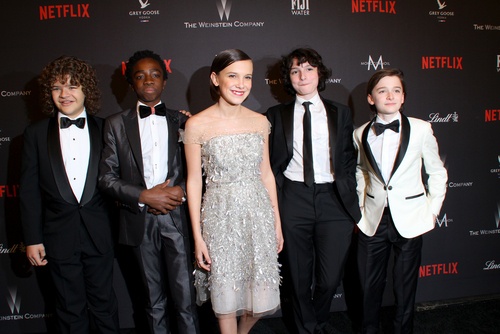 The Cast of "Stranger Things" arrives at the Weinstein Company and Netflix 2017 Golden Globes After Party on Sunday, January 8, 2017, at the Beverly Hilton Hotel in Beverly Hills, CA. (CarlaVanWagoner / Shutterstock, Inc.) What do you think? Discuss this story with fellow Project Casting fans on Facebook. On Twitter, follow us at @projectcasting.
Previous articleHow To Go To Taraji's White Hot Holidays for FREE!
Next article'The Gifted' Casting Call for a Military American Flag Folding Ceremony