HomeEntertainment NewsSir Ian McKellen: Coming Out Made Me a Better Actor

Sir Ian McKellen revealed that coming out made him a better actor.

Si Ian McKellen is the leading man in the upcoming movie 'Mr. Holmes, a feature film centering around Sherlock Holmes, a man who comes to terms with memory loss and a history of solving crime. At 76, the actor revealed how the industry has changed and what he has done to become a better actor and needless to say it is pretty inspiring. “I’ve known people like that, friends and family, and it’s part of everyday life as you get older measuring your own reactions to things and wondering how long it will be till you can’t remember what on earth they’re talking about,” he says. “So it wasn’t a hard puzzle. You look into yourself and other people. It’s not painful to do that. I played King Lear who is a more extreme example of someone who is losing it.” 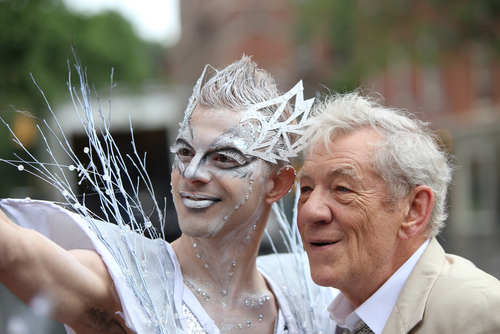 a katz / Shutterstock.com McKellen points out, it's all about learning how to use the gifts you are born with, as he had to do once when he lost his voice right before a one man performance. “One-man show, nobody has to come on, audience couldn’t hear a word I was saying,” he says. “I laid down and did some voice exercises but I wasn’t embarrassed. A friend said afterwards, ‘It was wonderful because you felt so at home.’…If something goes wrong with myself, I don’t disguise it. We put a microphone on me eventually and I got through but I think I rather enjoyed it.” “So I carry on,” McKellen, says, explaining that he never considered cancelling the show. “So there we are and I think that’s the spirit which gets you through any performance — something goes wrong, it’s a bit of a challenge, [but] collectively you can put it right.” Openly gay, McKellen worked alongside Sir Derek Jacobi as a Grand Marshall for New York's Pride parade this year, which came the day after gay marriage was legalized across the U.S.A. McKellen revealed that he recalls the time he couldn't even think about coming out as a gay actor. “You just thought this was the way it was supposed to be,” he says. “I didn’t feel put on or disadvantaged, just this is how it’s meant to be. I suppose in a more extreme situation, that’s what slaves must have thought, they couldn’t see a way out of it, this was it. “I had the compensation of acting and escaping into a world where I didn’t have to worry. I didn’t have to disguise because the whole conceit was a pretend reality. I think that’s why such a lot of successful actors are gay. They couldn’t cope with the real world, weren’t allowed to show their real emotions so they escaped into a pretend world.” McKellen says that coming out in 1988 made him a better actor, since he could finally be truthful in his performance. “I became a better friend, a better son, better brother, better uncle, better traveler, certainly a better actor,” he explains. “My acting stopped being about disguise and became about truth which suits the camera, so my film career took off when I came out.” Source: NY Daily News
Previous article[WATCH] 'Orange is the New Black' Casting Director Reveals How to Audition for Season 4
Next article'Game of Thrones' Kit Harington Shares Amazing Acting Advice