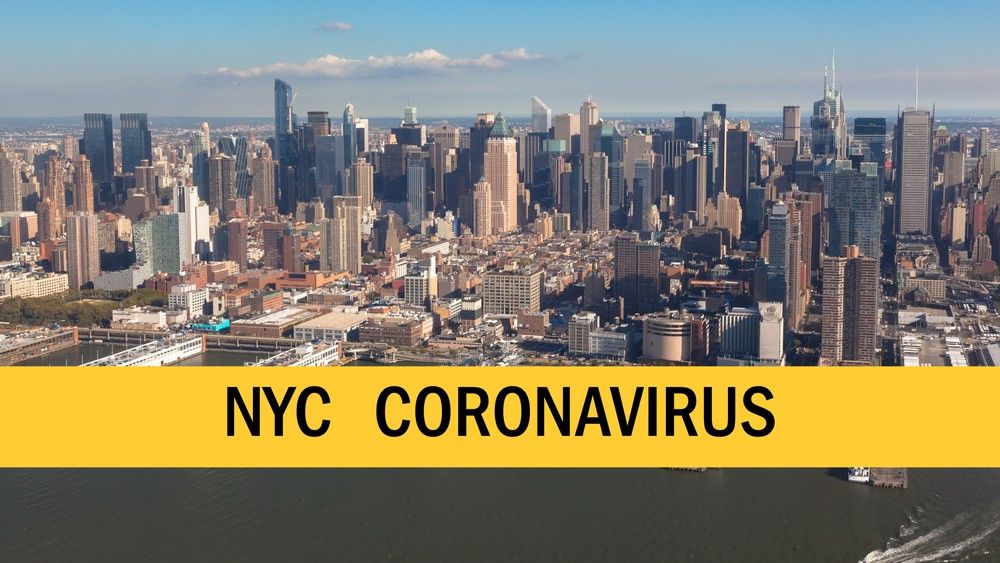 New York City skyscrapers are on aerial view. In the foreground text element is "NYC Coronavirus Coronavirus concept is in New York in USA

Mayor Bill de Blasio announced on Friday film and television production in New York City can resume next week. The restrictions of filming were part of the Coronavirus COVID-19 city-wide shutdown, which started in March. Cases have dropped since March and hospitalizations from COVID-19 have dropped to their lowest point in four months.

Film production can begin as part of the city’s Phase 4 reopening. NYC starts loosening restrictions, which allow the city to host professional sporting events, and other business related activity. That said, indoor dining, malls and museums are still closed in Phase 4.

Last March, several TV shows shut down. The state is looking to resume filming in Phase Four of the Coronavirus Reopening. However, when Phase Four will begin is currently unknown.

The guidelines released on the New York Governor’s website, reveals a long list of production safety precautions that are both mandatory and recommended. Some of the mandatory guidelines include the following:

Recommended best practices include the following:

This news comes after background actors are worried Coronavirus guidelines will destroy their acting career. One of the best ways to get started in the film industry is arguably getting a job as a background actor. The position requires little to no acting experience and gives aspiring actors, filmmakers, and producers the opportunity to see what it is like to work on a production. However, due to the Coronavirus COVID-19 guidelines, movie and TV extras could become a thing of the past replaced with CGI and smaller scenes. Many guilds including SAG-AFTRA, the Directors Guild, the International Alliance of Theatrical Stage Employees, and the Cinematographers Guild released rules planned to protect their guild members from infection. However, many of the guidelines suggest guidelines that say to reduce background extras and increase production expenses to hire background actors. In Los Angeles, the LA County Department of Public Health released guidelines for movies and TV shows saying that the “cast must be as silent as possible to avoid spreading droplets through talking.” Moreover, “Large crowd scenes should be avoided,” which is bad news for background actors who make at around $100 per day. Sande Alessi is the extras casting director from many hit movies including the ‘Pirates of the Caribbean’ and ‘Argo’. In an interview with The Hollywood Reporter, she says, “Nobody wants what I’m selling,” she says. “Nobody wants human beings.” In relevant news, Louisiana’s film industry is preparing to resume filming this July 2020.

Producers and production crews are set to start filming in Lousiana as soon as late July as the film industry is preparing to make major Coronavirus COVID-19 health-related changes.