2017 is going to be the best year ever to become an actor.

One of the biggest problems for aspiring actors is the lack of job opportunities. Actors are forced to work on smaller productions for less money. But, 2017 is going to be a huge year for aspiring actors. So, if you're interested in becoming an actor, now is the time to get started. According to reports, there are 500 scripted shows coming on 2017 and 71 original shows on Netflix. That means there are going to be hundreds auditions, thousands of casting calls, and dozens of job opportunities for actors in the next few months. 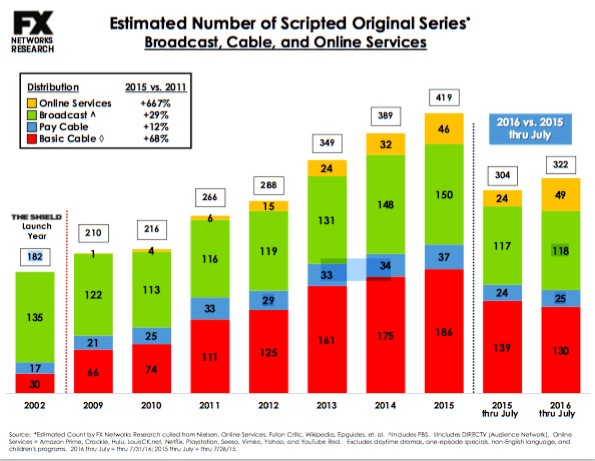 So why are there so many more TV shows? Well, according to FX president John Landgraf, it's because of streaming services like Netflix and Amazon, which are producing more content than they were just a few years ago. From Vox:

In fact, the report says that Netflix has debuted or announced a stunning 71 original scripted shows — and that doesn’t even include children’s, documentary, late-night, or non-English series.

If that still doesn’t register as particularly mind-boggling, consider that 71 original shows is, as Landgraf said, more than the future programming slates of HBO, Showtime, Starz, and FX combined.

But, some people are not too excited about so much television and scripted shows. Landgraf argued in 2016 that we would hit a point where there is too much content. And this year the FX president said, "we are going to hit a peak in the scripted series business within the next two and a half years and then see a decline — by calendar ’19 at the latest." Until that point comes, grab your headshot, sign up for acting classes, and go get your make up done because the acting jobs are about to start rolling in. Via Vox Related: What do you think? Share with us your thoughts in the comments below.
Previous articleJennifer Lopez to Play a Drug Lord in a HBO Movie
Next articleCritics Bash CBS for Not Casting Enough Non-White Actors

Have you ever wanted to become an actor? If so, Atlanta is the perfect place to start your career! Here are a few tips on how to get started. First, take acting...

If you're interested in writing a movie script, there are a few things you should keep in mind. First, your hand should be well-structured and easy to read. Sec...