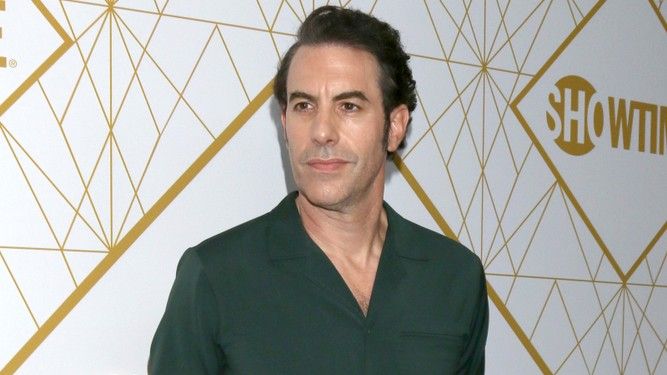 Sacha Baron Cohen opens up about how he stayed in character and why he changed from comedy to drama for Netflix's 'The Spy'.

It is common for many comedians to move into dramatic acting roles, there are some actors who do it better than others. For instance, it would seem hard to believe Sacha Baron Cohen could ever pull off a serious role after hit comedies such as "Borat", "Bruno" and "Talladega Nights". That said, Cohen is starring in his most high-profile role in the Netflix "The Spy", where he plays the real-life Israeli spy Eli Cohen in the early 1960s who is known as a master impersonator. In an interview with the "New York Times", Cohen opens up about his commitment to staying in character and why he was embarrassed to be into acting when he was a kid. When asked for staying in character, Cohen says, “If somebody sees through the character, either the scene ends or the police are called. It can, very occasionally, turn violent. So I learned that I could never drop character. When I was playing Ali G, I remained Ali G. That was the result of a steep learning curve: One day, an interviewee walked in on me while I was out of character, and he complained to [Channel 4’s executives>.” Cohen points out that while it’s very different material, he uses a similar approach when portraying Eli Cohen. He explains,  “So when I’m in a scene as Eli Cohen, I am pretending like a kid would be, reacting to things that I’m hearing as if I’m Eli Cohen.” Despite being a professional hit actor, Cohen admits that he had a hard time admitting he wanted to be an actor and he kept his love a secret. He says, "It was embarrassing to admit to other people that I wanted to be a comedian because I was essentially telling people that I thought I was funny. That’s as embarrassing as someone saying, ‘I want to be a model.’ You risk people saying ‘You’re far too ugly to become a model." Cohen added, "So I really kept my ambition to perform hidden, though I ended up going to Cambridge in order to join the Cambridge Footlights drama club. I was denied entry for three years but joined up in year four. I did a number of dramatic productions — Cyrano de Bergerac, Fiddler on the Roof, Tamburlaine the Great — so I had to learn how to act. That ended up being useful later in my career. But the idea of making a living from acting or being a comic was absurd.” Cohen admits one aspect of his love of acting is that it is still embarrassing. “I love doing musicals. I even snuck in some musical numbers into the early Ali G Show. Musicals are my embarrassing passion; they give me joy.”

Sacha Baron Cohen says he was nearly killed while filming the final scene in Bruno. Sacha Baron Cohen made his name for his over the top characters. The comedian who is known for his Ali...

Sacha Baron Cohen: Ali G Was BANNED From The Oscars

Fans are pissed with Sacha Baron Cohen's Oscars joke. Chris Rock handled the #OscarsSoWhite controversy poignantly and while many people felt like Chris Rock was racist against white people, others supported the comedian's efforts for...
Previous article'When They See Us' Netflix Casting Director Shares Tips for Aspiring Actors
Next articleExtras Casting Atlanta Casting Call for Cheerleaders