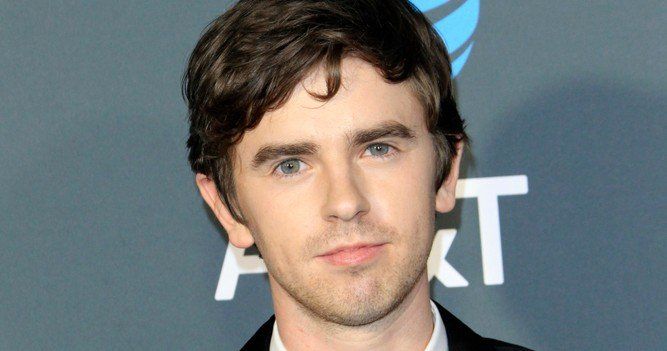 Freddie Highmore on acting and staying grounded as an actor.

The Good Doctor stars actor Freddie Highmore as Dr. Shaun Murphy, a surgical resident with autism. While Highmore plays a physician with autism, Highmore does not have autism. That said, Freddie did a lot of research and worked with an autistic consultant to help with his TV series role.

Since 2017, British actor Highmore has played Dr. Shaun Murphy, a surgical resident with autism, on the ABC medical drama. Playing a character with autism on such a big stage, Highmore takes the role very seriously.

Researching for the role:

Freddie said he knew about autism from people in his personal life with the condition. However, to properly play someone with autism, Freddie and The Good Doctor showrunner, David Shore, researched before filming the first episode. In fact, they hired autism consultant Melissa Reiner to help perfect the character.

"David Shore, our wonderful main writer and showrunner, and I sat down before the pilot — and also between the pilot and making the show — with the consultant that we still have on-board," Freddie said on ABC podcast Popcorn With Peter Travers. "And [we> also just traded back and forth books and pieces of literature and documentaries that we thought were useful or gave us some sort of insight into building this one, very particular character."

Freddie continues to research the role. Several seasons into the season, he says he is “constantly learning. He told Digital Spy in March 2019, "Aside from continual research, or working with the consultant that we have; I'm also talking to people who feel that they have a personal connection to the show through autism, and are pleased or thankful that the show is seeking to raise awareness in that way."

"The way that Shaun holds his hands is something that makes him stand out," he told the Los Angeles Times. "For me, that came from two places. Kids with autism [used to be] encouraged to clasp their hands together to not stim, [a term describing repetitive movements or sounds]. It's called 'quiet hands.' Surgeons in an operating room consider the front of the body as sterile and often stand in this position to keep their hands sterile. So that particular mannerism is sort of half something that's a trauma, that's been forced upon him, and is also something that's natural for surgeons to do, so there's a comfort there too."

"[David Shore and I] spoke mostly about Shaun and the development of his character over time," Freddie told the LA Times. "People who aren't aware of autism in a personal way or haven't watched the show sometimes say, 'How will Shaun change? He'll always have autism. What's his arc going to be?' So one of the things we discussed early on is, 'Yes, he'll always have autism. But he's going to change continuously as an individual as he adapts to this new world that he finds himself in.' That was exciting to me: This individual, regardless of whether or not he's on the spectrum, is going on a journey as a character."

Highmore says it was important that Shaun was not just someone with autism but a complete multi-dimensional person, just like any other character on television.

"I appreciate the way in which Shaun is a fully formed character," Freddie told USA Today. "Often, people with autism on screen have been represented as somewhat emotionless or singularly focused on one thing, and that isn't true. We get to see Shaun in moments of joy, what makes him excited, alongside the very real struggle he's facing."

In an interview with Scroll.in, Highmore talks about the challenges of playing Doctor Shaun Murphy, a genius surgeon who is an autistic savant, on “The Good Doctor.”

Highmore explains the playing a character that is both autistic and a genius took a lot of work. He reveals it took a lot of preparation to understand the role and how to portray Dr. Murphy on film.

“Shaun Murphy’s role required more preparation than any other role I did on TV,” he said. “In terms of autism, it was important for all of us that the portrayal of the condition was authentic. Again, we had a consultant here too. David [Shore, series creator] and I watched documentaries and read relevant books to help ourselves construct the character. But we were aware that Shaun is representing an individual’s story and not everyone in the autism spectrum. The key was to portray his journey as an individual and not someone’s who just autistic.”

Before “The Good Doctor,” Highmore played the young Norman Bates on “Bates Motel” series. On the differences between the series, Highmore explained, “I try to do different roles. It will get dull for me and the audience if the character is a replication of something I did before. The genre isn’t important as much as they need to tell an interesting character-driven story.”

How to stay grounded in Hollywood

In a 2017 interview, Highmore explained living in London and avoiding social media helped him stay grounded.

“I guess I am lucky. I think the distance from it as well with school and university allows you to see the illusions or see through them more so than if that’s your reality,” he told the Standard.
“But I think it also just helps you grow as an actor too. In the way that if your only experiences are growing up on sets, then it gets to a point where you don’t have anything to draw on in terms of real-life experience to portray these characters.” He added,“The majority of my friends I knew from before I started filming in a big way,” he said.
“Certainly those at university didn’t know me at the beginning from films really; it was purely that social aspect of being there before restarting it with Bates Motel.
“So I don’t feel that I’ve missed out on anything in that way. I guess it just seems normal; it seemed normal to me at the end of school that I would go to university.”

Freddie Highmore is an English actor who gained international recognition for his roles in Finding Neverland, Charlie and the Chocolate Factory, and August Rush. He has also appeared in many other films such as The Spiderwick Chronicles and The Art of Getting By. Highmore began acting at a young age, appearing in several shows and films before the age of six. His breakout role came in 2004 when he starred in Finding Neverland, a biographical drama about the life of Peter Pan creator J.M. Barrie. In 2006, Highmore was nominated for a Golden Globe Award for his lead performance as Charlie Bucket in Tim Burton's adaption of Roald Dahl's classic novel, Charlie and the Chocolate Factory. He later reprised his role as Peter Pan in 2013's Jamie Beardsley's adaptation of J.M Barrie's novel, "Peter and Wendy".

Since then, Highmore has starred in a variety of films, including August Rush (2007), The Spiderwick Chronicles (2008), The Art of Getting By (2011) and The Journey (2017). He has also had roles on television series, such as Bates Motel and The Good Doctor. Highmore is currently starring in the ABC drama series The Good Doctor which follows a young surgeon with autism and savant syndrome who relocates from a quiet country life to join a prestigious hospital's surgical unit. Highmore has received critical acclaim for his lead performance, earning him Golden Globe and Critics' Choice nominations. He is also an executive producer on the show.

Highmore's talent extends outside of acting as well. He wrote and directed the short film Passenger in 2015, which earned him a British Academy Film Award nomination for Outstanding Debut by a British Writer, Director or Producer. Highmore also composed original music for the film. He is currently involved with several projects including an upcoming adaptation of Jules Verne's classic novel, Journey to the Center of the Earth.

Highmore has achieved incredible success in his young career and continues to make strides in the entertainment industry. He is an extremely talented and versatile actor who has proven himself to be an incredible asset to the film and television industry. With his impressive list of accomplishments, Highmore is sure to enjoy a long career in Hollywood.

For more information about Freddie Highmore, visit his official website at www.freddiehighmoreofficial.com