HomeTips and AdviceShould Actors Get Tattoos? 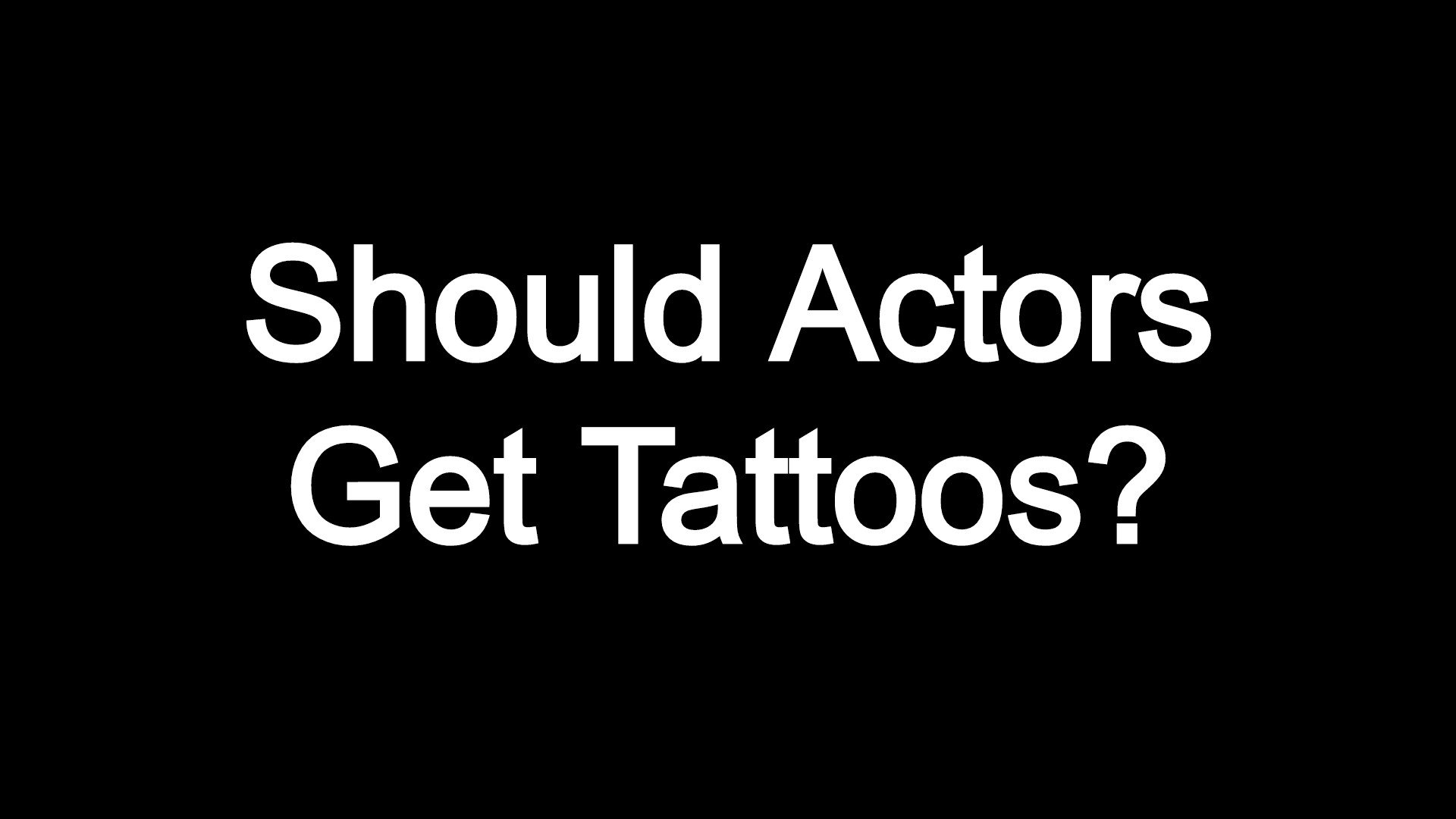 Should Actors Get Tattoos? That is a question hundreds of actors and aspiring actors ask. But does a tattoo affect an actor's career?

Tattoos have been around for thousands of years. This type of body modification became extremely popular in Europe in the 1700s. Since then, "ink," "pieces," "skin art," "tattoo art," "tats," or "work" have become a part of American culture with nearly every singer, rapper, or musician sporting a tattoo. But, what about actors? Should actors get tattoos? Let us investigate:

Mike Tyson's tattoo artist sued Warner Bros. to stop the release of 'Hangover 2'. According to reports, S. Victor Whitmill, the tattoo artist who calls the Tyson tattoo "one of the most distinctive tattoos in the nation," asked for an injunction to stop the release of the highly anticipated Bradley Cooper and the gang sequel. The man who gave Mike Tyson the distinctive facial tattoo sued Warner Bros. over the similar-looking facial art on Ed Helms' character in the 'The Hangover: Part II' movie. "When Mr. Whitmill created the Original Tattoo, Mr. Tyson agreed that Mr. Whitmill would own the artwork and thus, the copyright in the Original Tattoo," argues the complaint, filed Thursday in federal court in Missouri and obtained by THR. "Warner Bros. Entertainment, Inc. — without attempting to contact Mr. Whitmill, obtain his permission, or credit his creation — has copied Mr. Whitmill's Original Tattoo and placed it on the face of another actor ... This unauthorized exploitation of the Original Tattoo constitutes copyright infringement." It was a fascinating lawsuit. Whitmill argued that the tattoo is copyrighted work and that Warner Bros. needs to pay him for using his design. Whitmill sued Warner Bros., saying he did not permit the company to copy the plan for the actor Ed Helms' character "Stu" in the movie. He claimed the filmmakers copied the design that he tattooed on Tyson in 2003 in Las Vegas. Ultimately, Warner Bros. announced that they "amicably resolved" its dispute with the tattoo artist; This illustrates how a tattoo can cause a movie studio millions of dollars. Even though the symbol was used as part of a joke, it demonstrates the legal ramifications and drawbacks for actors that choose to get a tattoo.

Should actors get tattoos?

Many actors often complain that their most significant issue is getting typecast. "I want to be dramatic," actors say, "and Hollywood only wants me to be a gangster!" "I want to be gangster," yell actresses, "yet studio executives can only see me for my body!" Indeed, it is a sad thing that an actor cannot showcase their talents since casting directors only choose them for a particular type of role but, adding tattoos does not make it any better.

Should actors cover up tattoos?

Here's the problem with actors getting tattoos: It is tough to apply makeup that obscures an actor's tattoos with today's age of HD, IMAX, and the future of 4K televisions. You can try to use a bucket of Dermablend, but symbols still shine through. I was once in a popular TV series, and only people without tattoos were asked to audition. When people started getting fitted for their costumes, it was discovered that one girl had a tattoo she had been hiding. She was fired and replaced the next day with ease.

How about removing tattoos?

Many of us would not think of 50 Cent as a serious actor, at least when he first started releasing rap records in the late '90s. However, 50 cent's dream career has changed. Unfortunately, he felt that his tattoo-covered arms held him back from his acting career. The solution? Get them removed. He told People Magazine, "It cuts down on the amount of time I have to spend in makeup covering them up." The procedure seems to have paid off. 50 Cent had roles in 8 movies from 2011 through 2013 and has five more planned for 2015 and 2016.

What do casting directors think about background actors with tattoos?

We recently asked Jamie Lynn Catrett, the extras casting director behind the 'Divergent' series and 'The Hunger Games' about background artists that have tattoos and here is what she had to say:

I've hired a lot of background artists with tattoos lately for one of my projects, so I have gained a lot of experience, specifically over the past year, with symbols. I want to say that I'm not against tattoos; I think background artists should get tattoos if that's what they want, but I want people to be aware that tattoos now require an extra step - a tattoo release form. Because of a previous lawsuit between a production company and a tattoo artist, most production companies now need a form signed by the tattoo artist that ensures they will not sue the production company for using their art.

I had a girl just recently lose a featured role because her artist wouldn't sign a tattoo release form. I'm going to be blunt - he VEHEMENTLY REFUSED to sign the form. The production company loved the girl for this role (it was a tough chick role!), but they were scared the artist could sue them in the future, and so the ADs asked me to replace her because her tattoos were too much of a liability. The artist even said he wouldn't pursue legal action, but that he just didn't want to sign away rights to his work, and they still wanted me to replace her. It was sad watching an artist indirectly control this girls' career, but the production company wanted proof that they wouldn't be in an expensive legal battle, so I had no choice but to replace her.

As I said, I've spent a lot of time getting forms signed over the past year, and most artists - 95% of them - are incredibly cooperative with signing the paperwork. Some of them, however, will not sign any documents for any reason, even when they know it could stop their client from getting work. If background artists (or actors!) want to be able to work on-screen without fear of being in the middle of a lawsuit, my advice is that they seek out artists that are willing to sign tattoo release forms, and in some cases, sign forms for years to come. (Sometimes the tattoo artist will have to sign multiple releases if every show wants their release).

If you already have a tattoo & your artist won't sign a release - don't panic! If you have a small symbol, it might be easy to cover or alter with makeup. There are some great products out there now that cover tattoos well. Some of the more prominent symbols can take hours to cover, though, and as we all know, time = money. In the case of the girl losing the featured role above, the production company weighed the cost of having to pay an artist to cover her tattoos for hours, and they decided just to recast because it would have cost hundreds of dollars due to the size of her tattoos.

Overall - Should actors get tattoos? Probably not.

You're better off avoiding them. I have seen casting calls for something like a tattooed hipster but, at the end of the day it can typecast you for only a particular role, force you to get all of your tattoos cleared by your tattoo artist or the studio can face an expensive lawsuit similar to Mike Tyson's situation which could hinder your acting career.
Previous articleNetflix New Series 'Montauk' Speaking Roles Casting Call
Next articleWill Smith Shares Amazing Acting Advice: "Being Rejected Helped Me Act" (VIDEO)