The 29-year-old actor was caught on camera by Entertainment Tonight, speaking to locals in Germany after having an argument with Mia Goth. The unsettling clip shows Shia and Mia, who is currently filming a horror movie in Germany) fighting outside a hotel on Friday night. Shia LaBeouf was trying to leave to go to the airport, and his girlfriend took his backpack in order to stop him from leaving. Some locals offered to drive Shia to the airport, and he can be heard telling them: "I don't want to touch a woman, I don't want to hit a woman." 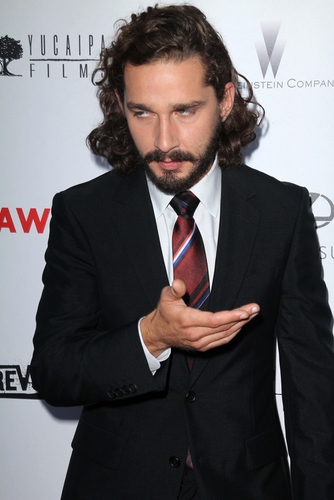 s_bukley / Shutterstock.com He is then seen on camera, saying to Mia: "I don't want to touch you. I don't want to be agressive. This is the kind of **** that makes a person abusive." Eventually, Shia gets his bag off Mia and leaves with the locals, talking to them in the car about the fight." He says: "If I'd have stayed there, I would have killed her... It's hard bro - really f***ed up - in your heart." Shia is also seen trying to FaceTime Megan Fox, his co-star in the first two Transformers movies. The actor claimed they had a relationship in the past. Tinseltown / Shutterstock.com He later promises his new friends that they can come stay at his house in Los Angeles. According to the German tabloid Pure Stars, Mia has been seen in the days following the argument, appearing to have a black eye. However, the video does not show any physical altercation. Shia LaBeouf has been dating Mia since 2012, after meaning on the movie 'Nymphomaniac'. Shia checked into rehab June of last year, after he was arrested during a performance of Cabaret in New York for allegedly slapping actors, smoking inside and yelling obscenities. You can watch the clip below:
Previous articleSeth Rogen, Zac Efron's 'Neighbors 2' to Film in Atlanta
Next articleCW's New Series 'Containment' Open Casting Call in Atlanta