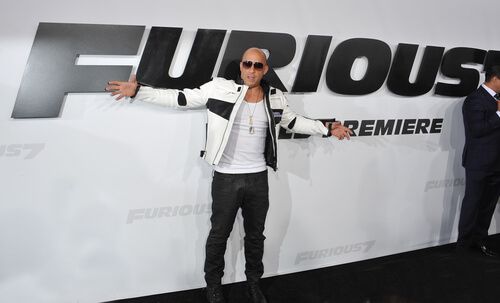 Vin Diesel shares a cryptic message on Facebook: Is it about Dwayne 'The Rock' Johnson?

Vin Diesel posted a mysterious post on Facebook after Dwayne 'The Rock' Johnson vented on his own social media account with a vide in which he expressed his frustrations with some of his male co-stars in the new Fast & Furious movie. In the video, Diesel says, “Give me a second and I will tell you everything,” Diesel said, adding in a more menacing tone, “Everything.” Diesel continues by telling his fans that he has been on set since CHristmas, and was excited to come home to learn that his daughter learned a new word, which apparently was "happy." He later said that her word not only described how he felt but "most people who stay positive." Diesel's message to his fans comes only a few days after Dwayne Johnson expressed his frustrations with one of his unidentified male co-stars. “Some conduct themselves as stand up men and true professionals, while others don’t,” he wrote on Instagram. “The ones that don’t are too chicken s–t to do anything about it anyway. Candy asses. When you watch this movie next April and it seems like I’m not acting in some of these scenes and my blood is legit boiling – you’re right.”

So much has gone on this year. I can't believe I wrapped two back to back pictures I both starred in and produced. Now I get to return to my family, my life... To me.

However, according to TMZ, Diesel was the co-star Johnson was referring to, because Johnson was not happy with Diesel's producing decisions. In addition, according to TMZ's sources, Diesel was arrogant and bashed co-stars acting. Johnson has since posted another statement, explaining that in such a big feature film, "there's gonna be conflict." “Family is gonna have differences of opinion and fundamental core beliefs. To me, conflict can be a good thing, when its followed by great resolution,” Johnson wrote. “I was raised on healthy conflict and welcome it. And like any family, we get better from it. At the end of the day me and #F8 co-stars all agree on the most important thing: Delivering an incredible movie to the world.” Related: What do you think? Share with us your thoughts in the comments below.
Previous articleMarvel's 'The Avengers: Infinity War' Open Casting Call
Next articleVin Diesel Reportedly Criticized The Rock's Acting on Set of 'Fast 8'