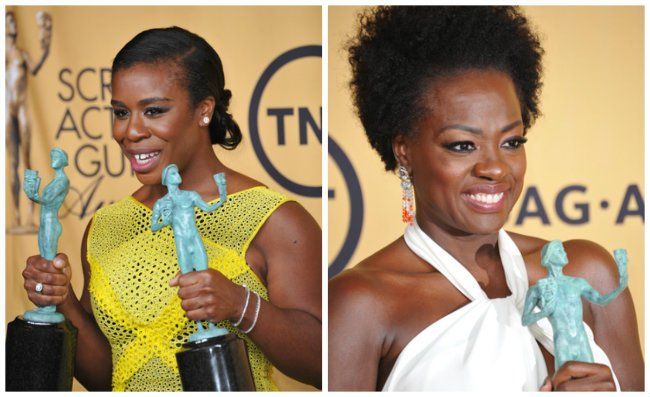 As the Oscars failed to nominate a single person of color in major acting categories, the Screen Actors Guild had no trouble awarding non-white actors and casts. Idris Elba won two Screen Actors Guild Awards in Saturday's ceremony alongside Queen Latifah, Viola Davis and Uzo Aduba. SAG's message was pretty straight forward: There is no shortage of talented diverse actors. Watching the SAG Awards felt like it was a direct response to the #OscarsSoWhite campaign. “Ladies and gentleman,” Elba said at one point, “welcome to diverse TV.” According to TheWarap, all members of Oscar voters' actor branch are in SAG, only a small number of SAG voters are Oscar voters.

The Oscar actors branch is about 1,100 people, but SAG voting membership is around 115,000 people.

Viola Davis said backstage that she and other actors of color she knows don’t put limits on themselves, and will “find a way to be excellent” no matter what is happening in the industry. “Diversity is not a trending topic,” she said.
But, a key difference between the Oscars and the SAG awards is that SAG recognizes TV as well as film, and the early wins for color were all for TV except for Idris Elba's win for Beasts of No Nation.
Once SAG started handing out awards in the film categories, viewers started to see a lot less diversity. For example, the Beasts Out of No Nation and Straight Outta Compton, two movies featuring a predominately non-white cast, lost out to the predominantly white cast of Spotlight  in the motion picture cast category.
However, Spotlight star Michael Keaton accepted the ensemble award on behalf of disenfranchised people everywhere, including the people living in Flint, Michigan, who are currently facing a public health crisis over its poisoned water.
Fans took to Twitter to comment on the amount of diversity in this year's SAG Awards.

@SAGawards congratulations to the actors of #SAGAwards2016, ? a solid bunch that recognizes fellow actors & #SAGnotsowhite is the BEST # ??

I turned to the SAG awards 15 minutes ago and so far Idris Elba and Viola Davis have already won. #SAGnotsowhite — Dawn (@RenewedDawn) January 31, 2016

#SAGnotsowhite I see what they're tryna do after the Oscar nom shame. Change the industry still