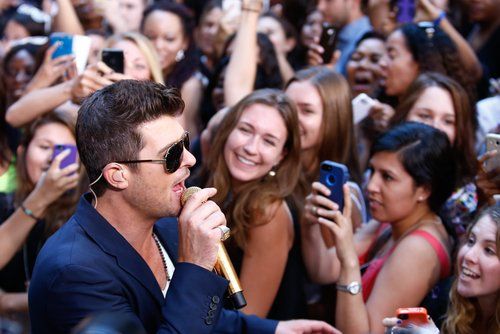 Robin Thicke has recently confessed that he was jealous of Pharrell Williams musical abilities that he told interviewers he had a bigger part in writing the 2013 hit song, 'Blurred Lines.' Robin Thicke was recently interrogated for stealing Marvin Gaye's song 'Got to Give It Up' and the singer told attorneys under oath that his involvement in the song was very small and insignificant. Currently, Robin Thicke and Pharrell Williams are in the middle of a legal battle with Marvin Gaye's children over allegedly stealing parts of Marvin Gaye's song without their permission. Robin Thicke told the Gayes' lawyer, "I was jealous and I wanted some of the credit... I tried to take credit for it later because (Williams) wrote the whole thing pretty much by himself and I was envious of that... I was present. Obviously, I sang it. I had to be there." But, Robin Thicke also revealed that he was abusing prescription medications and alcohol while, producers were creating the song.

"To be honest... I was high on Vicodin and alcohol when I showed up at the studio. So my recollection is when we made the song, I thought I wanted... I wanted to be more involved than I actually was by the time, nine months later, it became a huge hit and I wanted credit. "I started kind of convincing myself that I was a little more part of it than I was... but the reality is that Pharrell had the beat and he wrote almost every single part of the song... (I was) lucky enough to be in the room."

Robin Thicke also explained that this is particularly normal in the music industry. He added that, "This is what happens every day in our industry. You know, people are made to look like they have much more authorship in the situation than they actually do. So that's where the embellishment comes in." Robin Thicke also confessed he was high on painkillers when he sat down with Oprah Winfrey. When he revealed his wife, Paula Patton about his drug use, she left him. Related:  What do you think? Discuss this story with fellow Project Casting fans on Facebook. On Twitter, follow us at @projectcasting.
Previous articleLiam Neeson Calls for U.S. Gun Laws to Prevent a School Massacres
Next articleThe Hunger Games Mockingjay Part 1 Trailer is Finally Here and it's Amazing [VIDEO]