Reese Witherspoon and Jim from The Office have added to the growing criticism about the Oscars' lack of diversity.

Reese Witherspoon voiced her opinion over Facebook on Thursday by posting a statement and a link to an article about the Academy's voting process. Noting that the problem is predominately centering around white membership, she argues:

I really appreciated this article in TIME on the lack of racial and gender diversity in this year’s Oscar nominations.

So disappointed that some of 2015's best films, filmmakers and performances were not recognized...

Nothing can diminish the quality of their work, but these filmmakers deserve recognition. As an Academy member, I would love to see a more diverse voting membership.

It seems the #OscarsSoWhite discussion has gone from a Twitter trend to a hot button topic that anyone and everyone associated with Hollywood is asked to give an opinion. The diversity complaints are to the point that more and more white actors are either being asked about it or feel it necessary to give suggestions on how to fix the film industry. 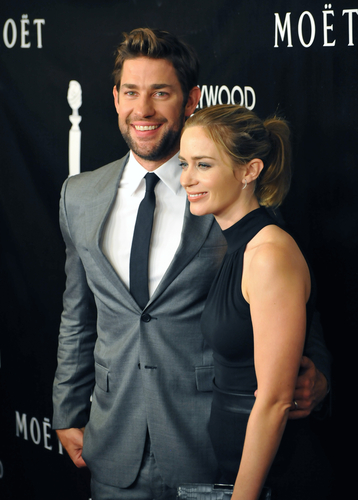 Jaguar PS / Shutterstock.com During a press tour for 13 Hours, John Krasinski called the Oscars lack of diversity "a huge shame" and "a big problem." “I think everyone has the right to be as upset as they are, because they should,” he told the AP, before pointing to the larger issue. “But my feelings are beyond the Oscars. Though I think it’s a shame, I don’t know that they should be taking all the responsibility,” he says. “I think in our industry and our business, it’s really about looking to who’s telling what story, who’s being allowed to direct, who’s being allowed to act in it, and I think that needs to change.” Page Six also reports that the Oscars are trying to find black presenters to make up for the lack of African American nominees. A source close to Page Six says, “The Oscars are looking for a black celebrity to give out the Best Picture award. Names they are talking about include Oprah Winfrey and Morgan Freeman.” It will be extremely interesting to see Chris Rock give the biggest performance of his career as the entire world is going to be watching.