HomeMoviesQuentin Tarantino: All of My Movies Are Connected 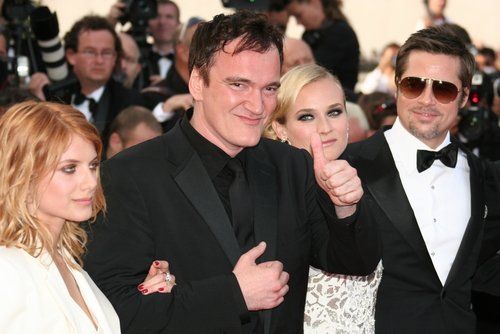 Quentin Tarantino reveals all of his movies are connected.

Fans of Quentin Tarantino have wondered for years whether Quentin Tarantino's characters were all connected. After all, we know that Reservoir Dogs' Vic Vega and Pulp Fiction's Vincent Vega are brothers, and that True Romance's Lee Donowitz is the son of Inglorious Bastard's Donnie Donowitz. We also know that they all smoke "Red Apple" cigarettes. However, it's bigger than that. Tarantino was interviewed by The Project on Monday and the Hateful Eight director confirmed that his movies are part of a large cinematic universe and that there's not only one but, two. “There is actually two separate universes,” he explained. “There is the realer than real universe, alright, and all the characters inhabit that one. But then there's this movie universe. So From Dusk Till Dawn,Kill Bill, they all take place in this special movie universe. So when all the characters of Reservoir Dogsor Pulp Fiction, when they go to the movies, Kill Bill is what they go to see. From Dusk Till Dawn is what they see.” For example, when Pulp Fiction's Mia Wallace was describing her pilot episode of Fox Force Five the description she gives to Vincent Vega is basically the same as Kill Bill - which explains that this pilot she filmed went on to become a movie, and that Mia secured the leading role.

Tarantino also revealed that a character in his new movie Hateful Eight has a secret family member connected to his "realer than real" universe. “I don’t want to say it point blank ‘boom!”, but if you’re a fan of my work and are familiar with it you could be a bit of a detective,” he told Digital Spy. “I will say that there is one character amongst the eight that is related to one of my other characters in one of my other films.” “I can’t explain the relation because that would tip my hat a little bit too much,” he hinted. “The only other clue I can give… is that the actor was originally cast as that character in the other film but they weren’t able to do it due to a scheduling conflict.”
Previous articleMarvel: 'Star Wars' and 'The Avengers' Crossover Movie (Maybe) Coming Soon
Next article[Watch] 'Neighbors 2: Sorority Rising' Movie Trailer is Finally HERE!