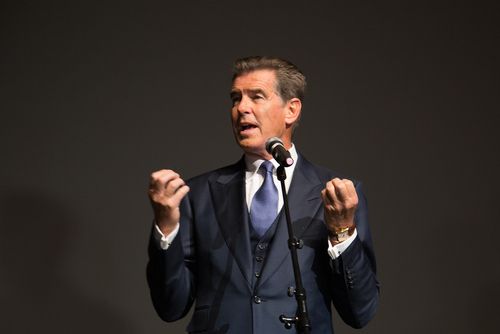 Pierce Brosnan tried to sneak a 10-in hunting knife on board a plane.

According to reports, former James Bond, Pierce Brosnan' was stopped after attempting to board a U.S. flight with a 10-inch hunting knife in his hand luggage. Pierce Brosnan was reportedly stopped on Sunday by TSA officials at Burlington International Airport in Vermont while traveling with his son.

Tinseltown / Shutterstock.com The Daily Telegraph quoted a local police officer as saying that the actor "was encountered by the TSA at one of their checkpoints." The knife was then confiscated, and Pierce Brosnan was given an extra patdown before being allowed to continue his journey. TSA rules state that sharp objects, such as knives and scissors, longer than 4 inches must be stored in checked baggage.
Previous articleWhy 'Grey's Anatomy' Killed Off Patrick Dempsey aka McDreamy
Next article'Empire' is Getting Sued by the Allegedly "Real" Cookie