HomeMoviesSTUDY: People Feel Safer at Movie Theaters than at Work 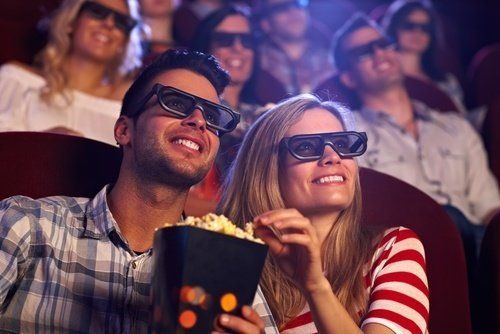 Despite mass shootings becoming a more common occurrence in the United States a new study is quite surprising.

Terrorist attacks in San Bernadino, California and Paris have put National Security to the forefront of politics and the media. Despite all of this anxiety about future attacks in public places, consumers are not afraid of going to the movies, according to a new study. 80 percent of moviegoers say they feel safe in movie theaters, according to a consumer insight firm C4. In fact, people feel safer at the movie theaters than they do at work, at a concert, sporting event and an airport. From Variety:

C4 polled 500 people who had seen six or more movies in the past year to see if their attitudes had been impacted by terror fears. Although they still view multiplexes as a safe space, most respondents believe that more needs to be done by movie theaters to prevent violent crimes from taking place. Only a third of moviegoers said they believed that theaters were doing enough to keep them safe. The company conducted a similar survey last summer after a gunman killed two patrons and himself during a showing of “Trainwreck” in Lafayette, La., and in the wake of an attack during a Nashville screening of “Mad Max: Fury Road” left a hatchet and pellet gun-wielding assailant dead. At the time, C4 found that while audiences supported additional safety precautions at theaters, they weren’t planning to alter their moviegoing habits.

That's good news for the upcoming release of Star Wars: The Force Awakens as the movie is expected to break nearly every record known to man. The next two weeks are projected to be among the highest-grossing of the year for movie theaters because the release of Star Wars is during the holiday season.

However, it is interesting to point out that nearly 70% of all Americans believe that mass shootings are a common occurrence, according to a NBC survey. “People aren’t changing their behavior, but they’re changing their mindset,” researchers said. “They’re accepting things that maybe a year or two years ago they wouldn’t consider.” What do you think? Are movie theaters safe? Share with us your thoughts in the comments below!
Previous article#TWDStarWars is the Best 'Star Wars' 'Walking Dead' Mash Up You Will Ever See
Next articleFilm Incentives Just Got Even Better for Filmmakers