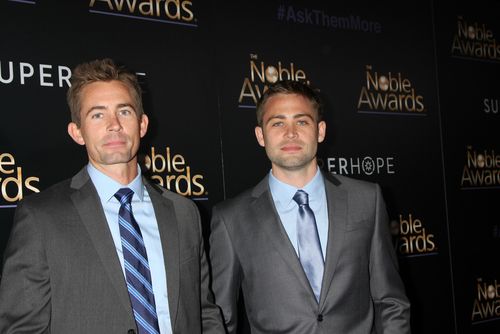 Cody Walker, 27, made his first appearance on the hugely sucessful 'Furious 7' following Paul Walker's tragic death in November 2013. Cody and brother Caleb Walker famously stepped in to finish Paul Walker's work after he was killed in the tragic car crash at the age of 40. According to reports, the youngest of the five Walker siblings will star in the upcoming USS Indianapolis: Men of Courage alongside Nicolas Cage.

USS Indianapolis: Men of Courage is currently filming in Mobile, Alabama and features Nicolas Cage, Tom Sizemore, Thomas Jane and Wronika Roasati. USS Indianapolis: Men of Courage will hit theaters on May 2016, and the movie centers around the United States Navy Ship USS Indianapolis, which sank in 1945 in the middle of World War II after being hit by enemy torpedoes. Paul Walker's brother is expected to play one of the ship's crewmen. Cage will star as Capt. Charles B. McVay III, the leader of the ship. Before joining the cast of 'Furious 7', Cody attended University of California, Santa Barbara and worked as a paramedic. He signed with an agent last April and is expected to get married next month. To audition for a role on USS Indianapolis: Men of Courage, check out the latest casting calls here. Discuss this story with fellow Project Casting fans on Facebook. On Twitter, follow us at @projectcasting.
Previous articleJohnny Depp's Wife Facing 10 Years in Prison for Bringing Dogs to Australia
Next articleCommercial Casting Call for Kids and Couples in Atlanta