HomeTVNorman Reedus: "It's Been Weird" Without Andrew Lincoln on Set of 'The Walking Dead'

According to The Walking Dead star Norman Reedus, life on the set of the zombie drama is pretty weird.

“It’s been weird as f–, I won’t lie,” Reedus said in an interview with Entertainment Weekly when asked what it’s been like filming without Lincoln. “I still send him scripts. When no one’s looking, I email him scripts, and he gives me notes still to this day. It was weird, I have to tell you.”

Reedus said the weirdest part was not actually filming without the actor, but instead, he misses hanging out with Andrew Lincoln on set of The Walking Dead.

“I’ve never not had lunch in my trailer with him in nine years,” he said. “We always get my lunch and go back to my trailer, the two of us. So I just kinda sat there quietly, like, where the f— is Andy right now?”

“That was the hardest part for me. It’s all healed itself, but I have to say eating lunch by myself in my trailer was really, really weird. It made me really depressed. In my trailer right now, one of the chairs in there is covered in blood and it’s from Andy Lincoln’s last day. He had somebody’s blood all over him, and he left my chair covered in blood. And I still won’t let the cleaning guys clean off that chair, because that bloody chair reminds me of Andy every day. The whole trailer’s really clean except for one chair that’s covered in blood.” 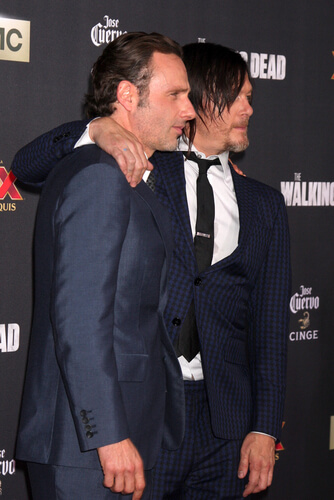 Related: What do you think? Discuss this story with fellow Project Casting fans on Facebook. On Twitter, follow us at @projectcasting.
Previous articlePeter Dinklage Reveals How 'Game of Thrones' Improved His Acting Skills
Next article‘Rogue One: A Star Wars Story’ Actor Riz Ahmed Got "Obsessive” For His Audition