Michael C. Hall says sometimes he wishes they would have just killed Dexter in the series finale.

It has been nearly a year since we last saw Dexter Morgan hide away in the middle of nowhere. This was because Showtime refused to let the serial killer die. Instead, the network forced the writers to come up with a way to make Dexter live so a possible spin-off series could be made.

The writers originally planned to kill Dexter in the series finale, and told the Network where the story line was heading, and the network quickly replied, let’s be clear, Dexter will live. So, the writers of Dexter did not even have a choice.

IGN recently sat down with Michael C. Hall, about his new movie "Cold in July". During the interview they brought up the possibility of a Dexter spin-off series. The actor replied that he had "no immediate plans" to revisit the role. But, he also replied that he learned "to never say never".

"It's very difficult for me to imagine someone coming up with something that is compelling enough for that to be worth doing," Hall continued. "I certainly have no interest right now in playing Dexter. You know, some time passes and somebody has some newly imagined landscape for him that I feel is worth exploring, I would perhaps consider it. Beyond that vague notion, I really can't say, and it's not something I have any immediate plans to do. 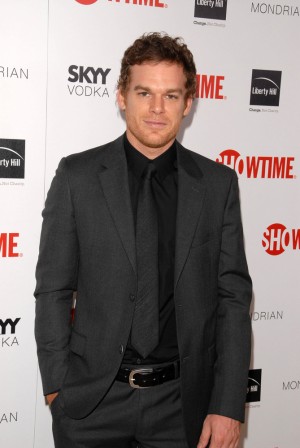 He is still alive, but for right now, I'm leaving him in the cabin." [IGN>

IGN asked how Hall felt about the ending of the Dexter series, the actor commented that the ending of the show was not as great as it could have been. Hall said that Dexter changed throughout the numerous seasons.  "It was a many-headed creative monster, and certain heads were lopped off halfway through the life of the show. It was difficult to maintain a cohesive narrative in many ways, but primarily, in terms of the conception of the character, once he started to move into murkier, blurrier, more human territory, it became a very difficult thing to wrap my head around. But in the end, I think Dexter was always a pragmatist and, well, self-centered. I think it was his version of selflessness upon recognition that anyone close to him was going to be destroyed if he continued to indulge in intimate relationships. You know, his dad died, Rita died -- well, once he decided that, he faked his death and erased himself, but he didn't want to die. I honestly find it to be a pretty dark ending, and I think it upset a lot of people. Certainly, the shakiness of certain aspects of the eighth season maybe made that ending less palatable to people. I don't think people were ready to be told that, because they were already feeling a sense of ambivalence for the show. But the idea that he imprisons himself in a prison of his own making I think is fitting [for the character]."

Dexter even commented that he wished that at the end of the seventh season Deb had shot him in the train compartment. But, that would have made it impossible for a eighth season.

If Showtime does plan on renewing the Dexter saga, we will keep you updated. Stay tuned.

Discuss this story with fellowProject Casting fans on Facebook. On Twitter, follow us at @projectcasting.
Previous article"The Originals" Season 2 Casting Call for Vikings
Next article42 Movies and TV Shows Now Filming in Georgia