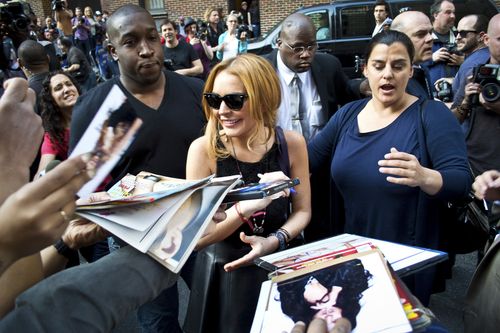 Lindsay Lohan recently told an interviewer this weekend that while she was doing a court-ordered punishment for drunk driving, the actress worked 12 hour shifts in a Los Angeles morgue. During that time she handled Whitney Houston's dead body. She recalls the work as "F'd up and inappropriate."

[Working in the morgue was> f'd up and inappropriate–because a lot of other people were meant to do it, and they were like: "No, they can't handle it. Lohan can." It's different for me than it would be for other people–like, no one would really have to work at the morgue in LA and roll a body bag for Whitney Houston.

TMZ reveals that this story is a lie. According to the coroner's office, "Whitney was NEVER in a body bag and no one in the probation program came in contact with Whitney's body." Looks as though Lindsay Lohan tried to use Whitney Houston's death as a way to promote her lackluster movie career. Related: What do you think?Discuss this story with fellow Project Casting fans on Facebook. On Twitter, follow us at @projectcasting.
Previous articleHere's the Newest Member of Saturday Night Live
Next article7-Up Used to Have Lithium, a Mood Stabilizing Element