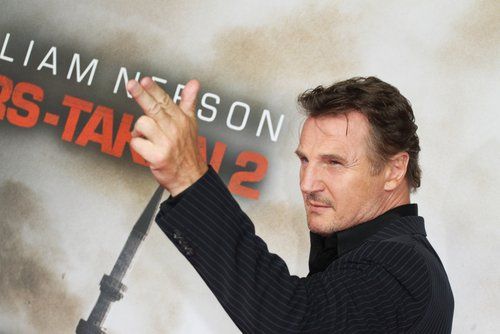 Actor Liam Neeson is urging U.S. government official to implement stricter rules on gun possession in order to prevent another high school massacre. Hollywood A-Lister is putting his foot down to avoid another school shooting. According to reports, Neeson has felt the way the United States treats guns as "crazy" and insists officials should follow the way the United Kingdom handles guns. In 1996, handguns were outlawed following the 1996 school massacre in Scotland in 1996. Neeson tells British magazine Radar, "I am totally for gun control in the U.S. The population of America is roughly 300 million and there are 300 million guns in this country, which is terrifying. Every day we're seeing some kid running rampant in a school. And do you know what the gun lobby's response to Newtown was? The National Rifle Association's official response was, 'If that teacher had been armed...' It's crazy. "I'll give Britain its dues, when they had the Dunblane massacre in Scotland, within 24 hours the gun laws were changed so you could not have a handgun... It is the right to bear arms which is the problem. I think if the Founding Fathers knew what was happening they would be turning in their graves with embarrassment at how that law has been interpreted." Related: What do you think? Discuss this story with fellow Project Casting fans on Facebook. On Twitter, follow us at @projectcasting.
Previous articleABC's 'Resurrection' Season 2 Casting Call for Nerds in Atlanta
Next articleRobin Thicke Reveals His Drugs Abuse and Lies About 'Blurred Lines'