Volkswagen Scandal movie is coming soon thanks to Paramount and Leonardo DiCaprio.

Paramount and Leonardo DiCaprio's Appian Way have acquired the rights to a book proposal by Jack Ewing, according to The Hollywood Reporter. Ewing's book will look into how a "more, better, faster" philosophy fueled one of the greatest frauds in corporate history. The Volkswagen emissions scandal, also known as Diesel gate, started last month when United States Environmental Protection Agency issued a Notice of Violation of the CLean Air Act to Volkswagen. The company had programmed their 2009 to 2015 turbocharged direct injection diesel so that US standards nitrogen oxides (NOx) emissions were met only during laboratory emissions testing. NOx emissions during driving were up to 40 times higher. 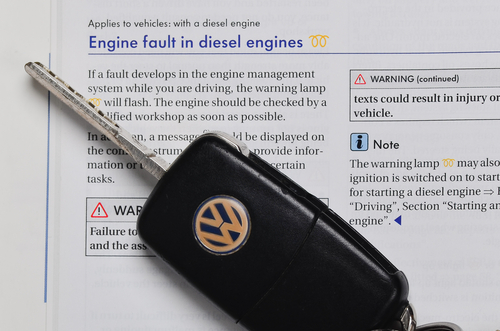 SGM / Shutterstock.com The EPA classified this programming as a broken device, prohibited by the Clean Air Act. An estimated eleven million cars worldwide, and 500,000 in the United States, included such programming. These findings came form a study on regional emission discrepancies commissioned in 2014 by the International Council on Clean Transportation collecting data on 15 cars. Taina Sohlman / Shutterstock.com Eventually, Volkswagen became the target of several investigations in multiple countries and the Volkswagen stock plunged after the news broke. Ultimately, Volkswagen Group CEO Martin Winterkorn resigned, and the head of brand development Heinz-Jakob Neusser, Audi research and development head Ulrich Hackenberg, and Porsche research and development head Wolfgang Hatz were suspended. Volkswagen announced plans to spend $7.3 Billion U.S. dollars to fix the issues, and planned to fix the affected vehicles as part of a recall campaign. simone mescolini / Shutterstock.com However, since the Dieselgate, the scandal raised awareness over the higher levels of pollution emitted by all vehicles, which demonstrate real world driving conditions are different and tend to exceed legal emission limits. In fact. a study found Volvo, Renault, Jeep, Hyundai, PSA (Citroen, Peugeot) and Fiat all had cars exceeding legal emission limits. This has sparked a national discussion over the software-controlled machinery which is prone to cheating. There are no reports on whether or not Leonardo DiCaprio will star in the upcoming Volkswagen scandal movie.

What do you think of the upcoming Volkswagen scandal movie? Share with us your thoughts in the comments below!
Previous articleWhy #NoBraDay is Probably a Huge Hoax
Next articleWarner Bros. Can Lose Over $100 Million Thanks to 'Pan'