Johnny Depp allegedly mutilated himself in a jealous rage over Amber Heard.

According to NY Post, Johnny Depp cut off the tip of his middle finger in a "jealous, drug fueled rage" and then used his bloody finger to write the names of the two guys he accused his wife, Amber Heard, of sleeping with. The Pirates of the Caribbean star allegedly dipped his severed finger in blue paint to write “STARRING BILLY BOB EASY AMBER” on a mirror. 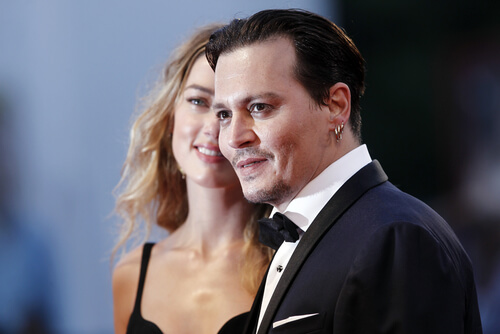 “He was super high. He consumed an entire bag’s worth of ecstasy, he was taking coke, smoking weed and drinking red wine,” a source told The Post.

“He was so high he couldn’t feel anything and was writing all over the walls in blood and paint.”

Depp mutilated himself after smashing several bottles and windows, then “bashed a telephone against the wall so hard that it sheared a piece of plastic off the phone that cut off the end of his finger,” the source said.

According to the Post, Johnny Depp cut his finger while he was filming the fifth installment of his Disney Pirates of the Caribbean franchise in Australia. Ilona Ignatova / Shutterstock.com Amber Heard and Billy Bob Thornton recently worked together in the movie London Fields. The movie centers around a terminally ill American writer living in London who meets a woman claiming to know the date, time, and perpetrator of her own murder. But, the two A-list actors have a long history together. Heard and Thornton worked together in 2004's Friday Night Lights and the 2008 movie The Informers. According to the Post, Heard denies cheating on Johnny Depp. “This wasn’t just about [Thornton],” the source told The Post. “He scrawled so many names of actors she’d worked with … He became completely delusional that she was going to cheat on him.” According to The Post, the photos are expected to be submitted at a Wednesday court hearing in Los Angeles. This news comes after a video leaked online. In the video Heard explains that she just woke up and apologizes for something while Johnny Depp is shown kicking various things and slamming cabinets before smashing a glass and emptying a wine bottle. At one point, he also says, “You want to see crazy, I’ll show you something crazy.” Then he notices the camera, a scuffle of sorts ensues, and the footage ends. Johnny Depp’s camp has told TMZ that the footage is “heavily edited” and “a complete set up.” They also claim that part of the video shows Heard “smiling and egging him on.” And his team believes Amber Heard leaked this footage, but she has denied doing so. The release of this clip also follows claims by Johnny Depp’s attorney, Laura Wasser, who said Amber Heard refused to testify at last weekend’s deposition and simply “paced in a separate room” while acting “manic and irrational.” Via Page Six Related: What do you think? Share with us your thoughts in the comments below.
Previous article'The Vampire Diaries' Season 8 Atlanta Casting Call for Featured Roles
Next articleOlympic Fans Injured After TV Camera Falls [VIDEO]