HomeCelebritiesJennifer Lawrence Reveals Why She is Mean to Her Fans (VIDEO) 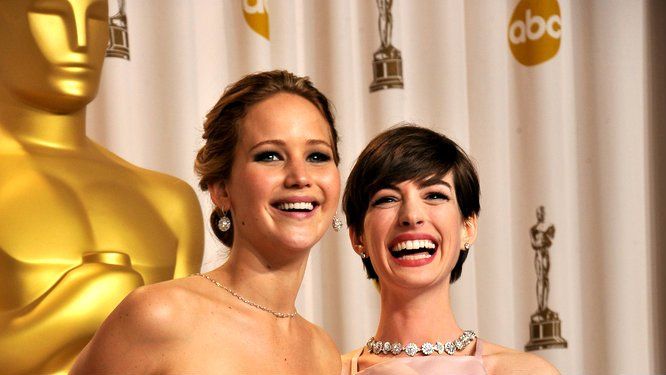 Jennifer Lawrence is not the nicest person around fans.

The Oscar winner admitted to Adam Sandler while talking during Variety Studio’s Actors on Actors series that she is mean to fans as a defense mechanism.

“Once I enter a public place I become incredibly rude, I turn into a huge a–,” she said when speaking of fan encounters with the legendary comedian. “That’s kind of like my only way of defending myself.”

Lawrence, 27, explains when she sees someone approach her table at a restaurant she is quick to shoot them down with a strong “No!”

“That’s like my only defense,” Lawrence said. “One of my best friends is Amy Schumer. I take my dog to the park all the time, Central Park. As soon as I meet her in the park, we’re f—–.”

Sandler conceded that fans usually “pull up a chair” when he’s at a restaurant and that they also usually ask for a photo.

While being famous may not be easy for Lawrence, it seems to be particularly tough when it comes to facing reviews, especially when you’re dating someone in the industry. Lawrence revealed in the interview that reviews for her mother! had an impact in ending her relationship with the movie’s director Darren Aronofsky.

“Normally, I promote a movie, you put the work in to promoting it, ask people to go see it, and then it’s just kind of out of your hands. I normally just kind of let it go,” she told Sandler. “Dating the director is different.”

Lawrence recently broke up with her director boyfriend, Darren Aronofsky, who directed the Oscar winner in mother! But they were together throughout the press tour for the movie.

“We’d be on the tour together. I’d come back to the hotel, and the last thing I want to talk about or think about is a movie,” she said. “He comes back from the tour, and that’s all he wants to talk about and I get it. It’s his baby. He wrote it. He conceived it. He directed it. I was doing double duty trying to be a supportive partner while also being like, ‘Can I please, for the love of God, not think about mother! for one second?'”

When he started reading some of the reviews to her, she found it unhealthy.  “I finally was just like, ‘It’s not healthy. Neither of us are doing it because if I read it, I start getting defensive.’ Especially because it’s my man,” she explains. “I don’t want to sound in an interview that I’m defending what we’re doing in any way. It’s awesome, what we did. Some people hate it and the people who hate it really hate it. But it’s nothing that needs to be defended and if I read a negative review, I just feel defensive.”