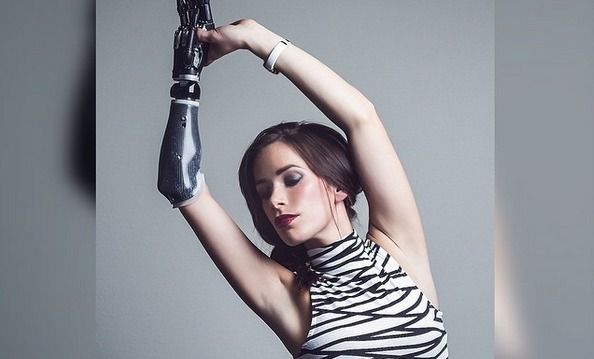 Check out this amazing superhero model. Even though Rebekah Marine has a prosthetic arm, that has not stopped her from launching a successful modeling career.

Now the model is appearing in Nordstrom's 2015 anniversary catalog and hitting the runway at New York Fashion Week.

The New Jersey mode, 28, made her fashion week debut last February during Antonio Urzi's presentation. She will appear in the FTL Moda show on September 13th, where she will wear a new prosthetic hand. "It's so important to include more diverse models, because after all, nearly one in five people in America have a disability," Marine, who was born without a forearm, told Mashable. "We should be celebrating uniqueness, not conforming to what the media thinks is beautiful."

The model confessed that while she has a positive outlook, it hasn't been easy to make it in the modeling industry. "Agencies often won't even look at my portfolio," she admitted. "But I've come to realize it's all about finding your niche. I've accepted that most clients may not want to work with me based on my 'disability.'" Either way, Marine, who also modeled bridal dresses, said she's going to keep going until she sees her dream brought to life. "Above all, I hope to land on the cover of Vogue one day—that's my personal goal. And I won't stop until I get there."
Previous articleShowtime is Now Casting Lead Role for Teddy Roosevelt Series
Next articleScientists Create a Machine To Tell Talent Agencies If You Can Become a Model