HomeEntertainment NewsDonald Trump: I Hope to Run Against Kanye West in 2020 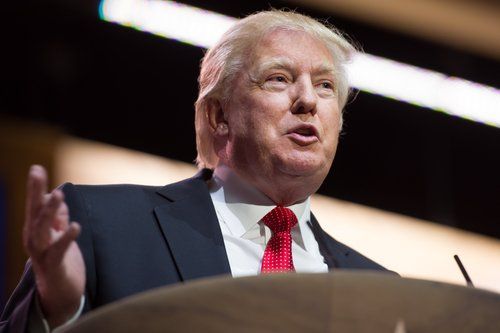 Donald Trump has revealed he is a big fan of rapper Kanye West's run for the White House in 2020, calling it an "interesting" idea and saying: "I hope to run against him someday."

In a new interview with the Rolling Stone, the 2016 Republican Presidential nominee said he was watching the MTV VMAs on Sunday night when Kanye West announced his future bid for president. The man known for saying "You're Fired" suggested he could have inspired West's move to politics, saying "I was actually watching, I saw him do it, and I said, "That's very interesting. I wonder who gave him that idea?"

He also said the 38-year-0ld singer, who is currently expecting his second child with his wife Kim Kardashian, is a nice guy who has said "extremely positive things" about him in the past. Kanye West stunned millions of viewers on Sunday night when he declared, "I have decided in 2020 to run for president" after being introduced to the stage in Los Angeles, California, by singer Taylor Swift. The announcement, which came at the end of Kanye West's 13 minute acceptance speech for his Video Vanguard Award, sparked countless comparisons between the rapper and the GOP frontrunner Donald Trump. Late-night host Jimmy Kimmel highlighted on his show on Monday that they both seem to share the same need to be like, a distaste for politics and hatred over the media's obsession with ratings. Image Credit: Christopher Halloran / Shutterstock.com
Previous articleREPORT: Undercover FBI Agents Spied on The Burning Man Festival
Next articleCate Blanchett will Play Lucy in 'I Love Lucy' Biopic