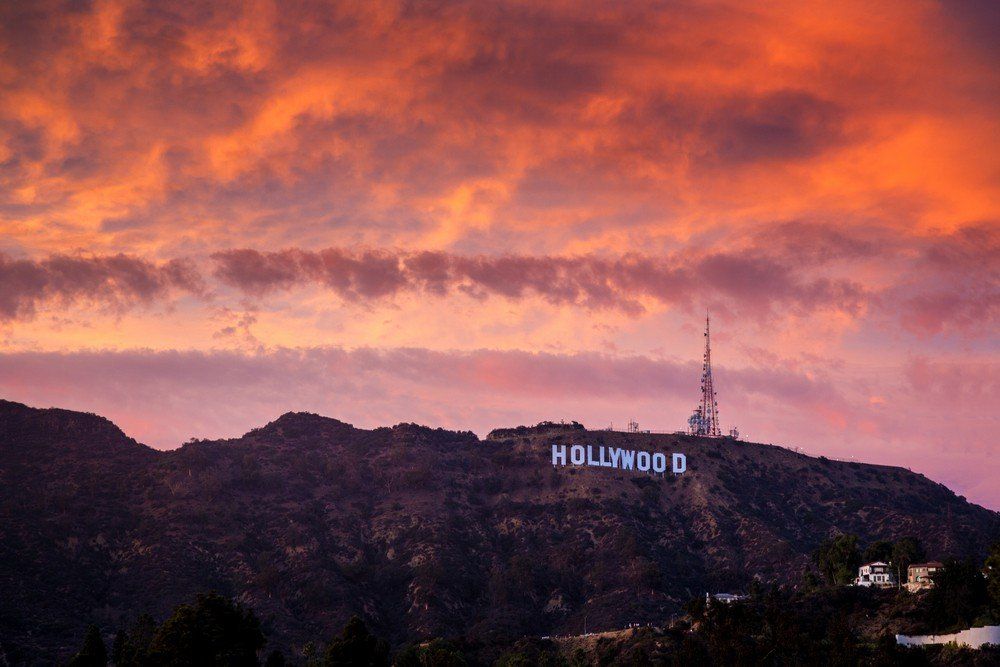 LOS ANGELES- Circa 2015: Distant view of Hollywood Sign on Mount Lee at sunset.

Filming in Los Angeles reveals the Coronavirus COVID-19 Pandemic is having a disastrous impact on the city's film industry.

According to FilmLA's quarterly production reports reveals how much of an impact COVID-19 is having on Hollywood's film industry. The report says on-location shooting in the greater Los Angeles area was down 18 percent in 2020, and the numbers will continue to fall. Filming was stable in January but began to slow down in March 2020. One thousand ninety-one local productions were filming in February with 644 projects by mid-March before all productions shut down on March 20 due to the state's "Safer at Home" orders. Los Angeles production has shut down indefinitely since the Coronavirus pandemic. Analysts predict losses due to the COVID-19 outbreak are unrecoverable for the rest of 2020. "Because we've gone to zero and it will be at zero for all of April and more than likely all of May, the second quarter will also be dismal as far as these numbers go," FilmLA's president Paul Audley tells The Hollywood Reporter. "Even if when production returns, it picks up at a greater volume than before, it isn't going to make up for the loss. So the end of this year will be a lower statistical number than we've seen perhaps in the last decade." Television saw the most significant decline, which is bad news since a majority of all productions filming in Los Angeles, were scripted TV series. That said, TV reality production increased by 11.7 percent and 771 shoot days, in comparison to 690 shoot days in 2019. Feature film production dropped by 6 percent to 665 shoot days, comparison to 708 shoot days in 2019. Feature films now filming in Los Angeles include Will Smith's 'King Richard' and Russo Brothers' "Everything, Everything All at Once." In relevant news, Hollywood executives are not in a rush to film in Georgia. According to a new Deadline report, even if Georgia plans to relax restrictions to include more film and TV production, Hollywood studios are not planning on taking advantage of filming in Georgia any time soon. Not until testing across the nation increases dramatically, and industry guidelines are created to provide a safe environment for their cast and crew. More Project Casting Entertainment News:
Previous article'Westworld' Season 4 is Coming Soon as HBO Renews the Series
Next articleGet Paid $5,000 to Make Tik Tok Style Videos

Hershey's company is now casting families for a photoshoot in Portland, Oregon. Casting directors are now casting actors, models, and influencers to work on sce...