HomeTVActor Reveals What It Was Like to Audition for ‘The People V. OJ Simpson’

Sterling K. Brown shares his acting technique and details behind his audition for FX's The People V. OJ Simpson

Cuba Gooding Jr. is doing an amazing job on FX's The People V. OJ Simpson and while the actor was given the role of O.J. Simpson without basically having to audition, Cuba Gooding Jr. shared his best acting tips in a recent interview. Related: The People v. O.J. Simpson: American Crime Story – 10 Things You Did Not Know But, what would it be like to audition for a role on The People V. OJ Simpson? Well, one actor has stepped out of the court room shadows and revealed the details behind the FX audition. Sterling K. Brown plays Christopher Darden on the hit FX series. Prior to playing the infamous prosecutor, Brown was a NYU graduate who worked extensively in theater. “I was in Berkeley and Princeton and Minneapolis and all over the country doing wonderful plays for the local audiences. Then I tried to transition into doing more theater in New York City, and also a bit more film and television. Then after being out of school for about five years, I wound up moving to Los Angeles just to explore whatever opportunities were available on the West Coast.” Related: John Travolta Returns to TV with FX’s ‘American Crime Story’ Brown went on to say that he would never leave theater. “It’s a more physical and athletic activity. He added that he also loved the “excitement and the response of being in front of a live audience. But, I will not hesitate to say being in front of a camera pays the bills, and it allows me to have my family and not have to worry quite so much.” 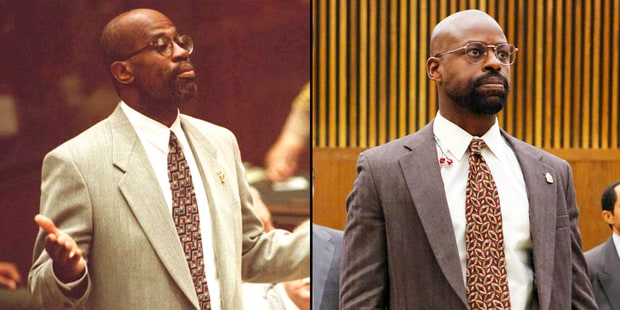 When Brown first found out that he was chosen to audition for the role of Christopher Darden, he said he instantly went to YouTube to study the man he was about to play. “After watching that footage, I went into the bathroom and cut all of my hair off. And I looked at myself and thought, ‘OK, this could possibly work.’” He remembers giving a good audition but with all the big names attached – Sarah Paulson, John Travolta, Courtney B. Vance and Nathan Lane – he never thought he’d get the part. Related: American Crime Story: O.J. Simpson Casting Call for Featured Roles The actor didn't hear back for nearly three months. “I got called back in to re-audition for the producers. I had to fly from Albuquerque because I was there working on Whiskey Tango Foxtrot at the time. I was the only person they brought back. I read for the producers Brad Simpson and Nina Jacobson. They had me do a couple of different scenes. Later that evening, they called me as I was taking my son to basketball practice and they told me I had booked the job.” You can watch Sterling K. Brown on Tuesday nights on FX's The People vs. OJ Simpson.