Better Call Saul is an drama series created by Vince Gilligan and Peter Gould. It is a prequel/spin-off of Breaking Bad, which was also created by Gilligan in 2008. Set in 2002, Better Call Saul follows the story of small-time lawyer James Morgan "Jimmy" McGill (Bob Odenkirk), six years before his appearance on Breaking Bad as Saul Goodman; events after the original series are briefly explored. The debut episode set the record for the highest-rated scripted series premiere in basic cable history, with 4.4 million viewers in the 18–49 demographic, and 6.9 million viewers overall. Better Call Saul has received critical acclaim. On Rotten Tomatoes, the series has a score of 100%, based on 61 reviews, with an average rating of 8.1/10. The site's critical consensus reads, "Better Call Saul is a quirky, dark character study that manages to stand on its own without being overshadowed by the series that spawned it." White Turtle Casting is currently accepting submissions for ALL TYPES & ETHNICITIES. Season two of 'Better Call Saul' begins filming in Albuquerque, New Mexico on July 9. To be considered email info, as pictured below, to [email protected]. NEW MEXICO residents considered first, but out of state submissions will be accepted IF applicant confirms 24 hour access to arrival in Albuquerque. For more details and how to audition for 'Better Call Saul' Season 2, check out the the casting call details below: 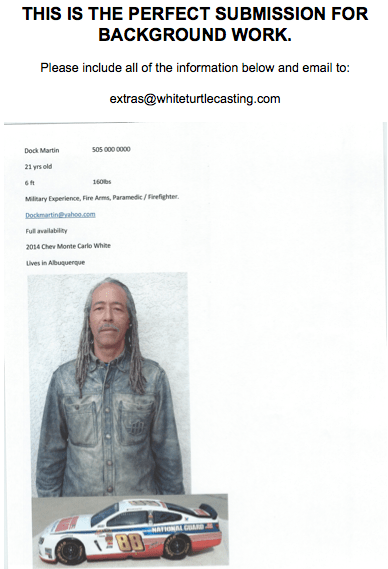 Discuss this story with fellow Project Casting fans on Facebook. On Twitter, follow us at @projectcasting.
Previous articleWilliam Hurt Reveals the Horrific Details Behind the 'Midnight Rider' Accident
Next articleWant Your Own MTV Show? MTV TV Shows Casting Call