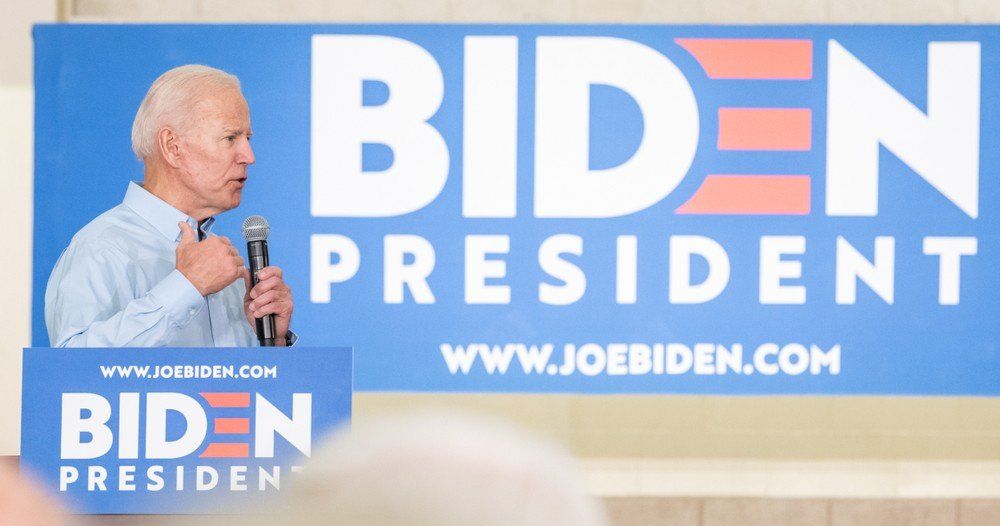 Joe Biden stars in the first Hollywood fundraising event of his 2020 campaign.

According to Variety, Joe Biden spoke to hundreds on Wednesday evening at the home of James Costos and Michael Smith in his first fundraising tour through Los Angeles since he announced his 2020 presidential campaign. The entertainment news outlet says Hollywood's elite political class including Jeffrey Katzenberg, Tom Rothman, Rob Reiner, and Chris Silbermann were among the long list of co-hosts for the event. Among those at the event, which was priced at $2,800 per person, including Chesley “Sully” Sullenberger, Aubrey Plaza, Tom Ford, Michelle Kwan, and Jason Collins. Biden spoke from a stage and talked about being a consensus builder with some in attendance shouting "Go Joe!" as he spoke. “I promise you if we elect a Democrat this time — I predict to you whether it is me or someone else — but I guarantee you if it’s me, what’s gonna happen is, we’re going to see this country come together like it hasn’t in a long time,” Biden said, according to a pool report, to a crowd that gathered on the home’s front lawn under heat lamps. “Because people are tired, they’re sick and tired of what’s happening. Let’s lift our heads up. Again, not a joke, remember who the hell we are.” He said that about a half dozen of the attendees had called him over the past two years to urge him to run, evening saying, “You don’t have a choice — run. This is not about you.” “I said, ‘Thank you very much,'” as the crowd laughed. As Variety points out, the number of co-hosts who organized for Biden's first Hollywood campaign also organized the Obama-Biden 2008 and 2012 presidential campaign. Those present include  Those present also included producer Eric Ortner, Tennis Channel President Ken Solomon; Colleen Bell, former U.S. Ambassador to Hungary, and her husband, producer Bradley Bell; Noah Mamet, former U.S. Ambassador to Argentina; Sony-Screen Gems senior vice president Eric Paquette; entrepreneur Jon Vein; and Michael and Mattie Lawson. As one attendee told Variety, “It is the band getting back together.” It is important to note there are many candidates early in the race, the attendees said that Biden "closed a lot of deals" convincing donors he is best suited to take on President Trump. Biden was critical of Wall Street philosophy saying, “Since when are they the only job creators? Since when has that happened? Since when has it become the fact that there’s no obligation to employees?” He added, “Stockholders aren’t the only job creators.” Biden talked about the freedom of the press promising, “every single fundraiser I do” will allow for reporters to attend as he explains,  “I don’t want to hear anybody say we are doing things in secret.” Biden also gave a warning of what will happen to America if Trump is reelected. “Four years of this president will be an aberration in a moment in history; eight years will fundamentally change who we are beginning particularly in foreign policy,” he said.

Mayor Pete Buttigieg may have only recently announced his presidential bid, he has already raised big bucks from Hollywood donors. According to Deadline, James Murdoch donated $2,800 to Buttigieg last month, according to Federal Election...

The Rock Gains Hollywood Support For A Presidential Run

This seems like everybody's going to run for president in 2020. There have been reports that Facebook's Mark Zuckerberg is considering running for president. There are also reports that Oprah Winfrey is throwing in...

Spike Lee Bashes Hollywood: Getting a Black President is Easier than a Black Studio...

Spike Lee bashes Hollywood Spike Lee is going to go down in history as the director that never backed down and was never afraid of saying what he believes in. Ever since he created culture...
Previous articleDisney Reveals Three Upcoming "Star Wars" Movie Release Dates
Next articleReady for Fashion Week? Open Casting Call for Runway Models